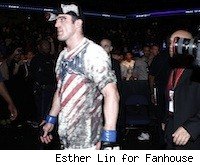 According to Dodd, who spoke to SI.com, Sonnen admitted to him during testing that he had used an illegal performance enhancer prior to the middleweight championship bout against Anderson Silva. Dodd did not name the specific drug Sonnen allegedly admitted to using, and Sonnen did not indicate any usage on a mandatory pre-fight questionnaire.


More: Sonnen Plans to Appeal | CSAC Exec Dodd on What's Next
The CSAC has yet to formally release an official statement on the matter, and neither Dodd nor Sonnen responded to attempts for comment by MMA Fighting.

Testosterone is a naturally occurring substance in the body, but elevated levels can signal steroid use. Athletes that have been busted for high testosterone levels include baseball slugger Manny Ramirez, NBA star Rashard Lewis and cyclist Floyd Landis.

Sonnen, a longshot underdog in the fight, squared off with longtime reigning champion Silva and surprisingly dominated him for more than four rounds before falling into a stunning, fight-ending triangle submission in the fifth. For his efforts, he had been scheduled to receive an immediate rematch. Now the CSAC suspension is likely to cost him another chance at the belt.

In the months between the time the fight was announced and it actually took place, Sonnen (24-11-1) hyped the fight incessantly, building it into a must-see attraction.

Sonnen also ran for political office during the stretch as well, handily winning a Republican primary for a state representative seat in House District 37, though he later withdrew from the general election race.

The usually outspoken star has been mum in the time since the positive test was first reported, and has yet to make any statement. Sonnen reportedly received formal notice of his test failure last Friday and has 30 days in which to file an appeal.