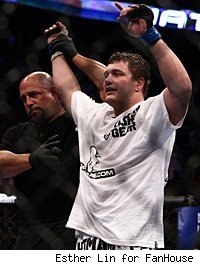 All eyes were on Matt Mitrione.

The former NFL and all-Big Ten Conference lineman at Purdue had already been labeled a rat by his "Ultimate Fighter" housemates for spilling his team's planned matchups to the opposition. He had been called out by his coach, Rashad Evans, for being merely sore and not injured. And then there were the voices in his head (which he has said after the fact was just an act to alleviate boredom).

Against Scott Junk in a preliminary fight on TUF 10, Mitrione threw kicks and punches with wild abandon. Near the end of the first round, it was clear he had already used up most of his energy. He won a majority decision in a fight that was a mashup of ugly and fun.

A year later, Mitrione is 2-0 in the UFC with a knockout win over Marcus Jones on the TUF 10 live finale last December and a TKO of Kimbo Slice at UFC 113 in May. But it was the fight with Junk that helped make a different voice go off in his head. It was a voice that told him to slow up a little, and Mitrione said that's the most important thing he's learned since leaving the TUF house.

"I've learned a significant amount about fighting since I left the show," Mitrione told MMA Fighting last week. "(Most importantly) I've learned patience and pace. You can't force a fight – you need to let the fight come to you. I learned that in my fight with Scott Junk. I was angry, and I was hoping I'd thrash him. I punched myself out. I was angry. I was emotional. I didn't understand the tempo, and it showed – I gassed in three minutes. The most significant thing I learned is that your body has to develop to the fight and you can't try to force things."

Mitrione said he believes the fight against Slice shows that he's been able to develop as a more well-rounded fighter. He had several submission attempts, though he laments not being able to finish any of them off, instead settling for a ground-and-pound TKO victory that earned Slice a pink slip from the UFC. But he said he's been a bit of a Cinderella story, anyway.

"Nobody really thought I'd be the guy to come out (of the show with success)," Mitrione said. "There's a handful of other people who have done well, but I got lucky that I was athletic and I was willing to learn. I want to take advantage of my time and I want to make the most of it."

Mitrione's next task in the heavyweight division is Joey Beltran, whom he'll fight in his own backyard at UFC 119 in Indianapolis on Saturday. Beltran, also 2-0 in the UFC with wins over Rolles Gracie in his debut and Tim Hague, has 10 of his 12 wins by knockout. But he's also known for his wrestling, an area that Mitrione has been working on with Purdue wrestling assistant coach Tom "Big Cat" Erikson, a former fighter in Pride and K-1 who has been in the ring with Fabricio Werdum, Antonio Silva and Heath Herring and who has wins over Gary Goodridge and Kevin Randleman.

"Big Cat is about as experienced a wrestler as they get," Mitrione said. "Big Cat was second in the world for like a decade. The work I get with him, everything across the board, has been good for me."

Though he camped at Duke Roufus' Roufusport Fight Club in Milwaukee, working often with Pat Barry, for his fight against Slice, he spent just a week there for this training camp. Barry's broken hand and recent surgery for Ben Rothwell left Mitrione without big heavyweights to work with. And there was the wrestling need, which he honed with Erikson, plus fellow UFC 119 heavyweight Sean McCorkle and even a high school wrestling coach in Northwest Indiana, Dave Maldonado, who was a state champion.

But make no mistake. Though Mitrione still believes Beltran's gameplan will be to take the fight to the ground, it's the standup game he hopes can win him the fight.

And taking a cue from his fight with Slice, in which he announced to the world pretty clearly that he had learned a few things about the kickboxing game from Barry, Mitrione plans on creating distance the same way against Beltran.

The Mitrione-Beltran fight airs as part of Spike TV's live preliminary card at 9 p.m. Eastern. UFC 119: Mir vs. Cro Cop airs Saturday on pay-per-view at 10 p.m. Eastern and takes place at Conseco Fieldhouse in Indianapolis. It will be the UFC's first visit to Indiana.