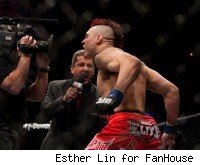 On Monday's edition of The MMA Hour, Hardy discussed Carlos Condit's decision to call him out for a fight.

"That was probably the stupidest thing he's ever done in his career." Hardy told Ariel Helwani.

Hardy, who accepted Condit's request and the two will meet at UFC 120 on Oct. 16 in London, was asked what his initial reaction.

Hardy went from respecting Condit to questioning his sanity.

"I knew him watching him on the WEC and I thought he seems like an intelligent guy and he's up for a fight," the British striker said. "But after him calling me out, I'm changing my opinion of him. I'm starting to think he might have some kind of brain disability, maybe."

Hardy says he has a lot to prove after a gutsy, though limited performance against champion Georges St-Pierre in March.

"To call and position himself in front of me right now when I'm feeling like this, and as determined and angry as I am," Hardy said. "It's probably the most stupid thing he's ever done in his life."

While on The MMA Hour, which will be available for replay Tuesday, Hardy also touched on a number of other hot topics.

-- On encouraging fighters to fight to finish instead of winning on points: "The Knockout and the Submission of the Night bonuses are one of the best things the UFC has ever done in my opinion. Cause there are a lot of people out there that will put it on the line for that extra paycheck."

-- On fighters treating MMA as a game instead of a fight: "I think it's been something that's been developing in this sport the last few years, really, and now I think the judging criteria has become more defined; I think more people know they can play the fight like a game, like a competition. That wasn't what attracted me to mixed martial arts in the first place."

(Check out Monday's edition of The MMA Hour below.)