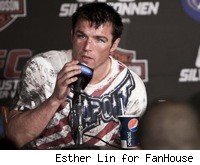 Sonnen, who was reportedly mailed paperwork with his results in the last few days, will have 30 days to appeal any finding of guilt. If found guilty, Sonnen faces the possibility of a one-year suspension and a fine.

The testing was done by the UCLA Olympic Analytical Laboratory, the world's largest World Anti-Doping Agency (WADA) accredited sports drug-testing facility, as well as a lab that has handled anti-doping for the U.S. Olympic committee since 1985.

Sonnen dominated Anderson Silva for almost the entirety of their UFC 117 middleweight championship bout until Silva locked on a fight-ending triangle submission in the fifth and final round.

Repeated attempts to reach Sonnen for comment have gone unanswered.