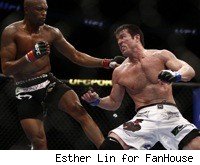 If found guilty, Sonnen could face up to a one-year suspension from the California State Athletic Commission, which would obviously put his title rematch against Anderson Silva, currently scheduled for Jan. 2011, on ice.

However, Silva's manager, Ed Soares, told MMA Fighting Sunday that he has yet to hear from the UFC regarding any change of plans.

"I'm going to consider the fight being a fight until told otherwise," Soares said. "If it is a mishap, I hope this whole thing gets straightened out."

MMA Fighting has attempted to reach Sonnen, his manager Mike Roberts and Dana White for further comment, but have not heard anything back yet.

There is still no word as to what kind of drug Sonnen tested positive for, but it appears certain that it wasn't a drug of abuse.

The CSAC is expected to formally address the situation in the coming days.

And if you are thinking that Silva's camp is gloating over Sonnen's troubles after all that was said before and after the fight, think again. Soares said this news is "bad for the sport of MMA.

"If this is true, I feel really bad for him," he added.

"I don't think anybody is stoked to hear that, not even us. I'm bummed for him."