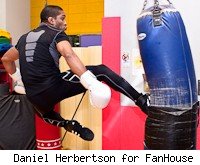 Despite his disarming smile and playful demeanor, Maximo Blanco is one of the most violent men in MMA. Slams, soccer kicks, stomps and flying knees are on the menu during a Blanco bout and referees, doctors and his opponents all struggle to duck and cover during the post-fight violence that ensues during his adrenaline dump.

One fight away from a Sengoku Lightweight title match, the Lightweight King of Pancrase spoke with MMAFighting.com about his path to Japan, his Jackie Chan inspired striking and being bullied through university.
Although Blanco is from a fairly average middle class family in Venezuela was, life was still hard. A lack of money and food for him and his loved ones left Blanco looking for a way out and he saw only two options: the army or wrestling.
After I win I feel like a bomb and I can't stop myself. That is something that I need to be aware of and I need to be careful of.
-- Maximo Blanco
"I didn't really have much money and there wasn't much food. I was trying to get into the Venezuelan army because they would have been able to help me. If I were to be involved with the army I would have wanted to have been a general. Someone who didn't need to fight. Someone who can just watch."

Despite Blanco wanting to avoid fighting, he was undeniably good at it.

"I was about to join (the army) when I was scouted (for my wrestling). I was having a hard life (in Venezuela). I had to follow the (opportunities I was given). It was destiny (that brought me to Yoshida Dojo)."

The last minute scouting that kept Blanco out of the army was the first of many. Domestic titles in high school led to him being scouted for his ticket out of Venezuela – a scholarship at a Japanese university in Fukuoka. His Pan American wrestling bronze medal in 2007 then led to him being picked up by Sengoku and placed in Yoshida Dojo as one of the first two fighters sponsored by the promotion.

Life was also not easy in Japan initially. Being the only Venezuelan and speaking little Japanese led to problems.

"There were a lot of bullies. A lot. I was bullied in my first, second, third and fourth years at university. It was very lonely."

The massive scar on Blanco's left fist is indicative of how unsuccessful some of the bullies were, but still it left a lasting impression on him.

"When I was a first year university student I ended up in a fight with my classmate. I hit his teeth and cut the back of my hand and it got infected so I had to be hospitalized for one week. I want to go back in time in a time machine and beat up everyone. If I had a time machine I'd go back and fight everyone."

Blanco wears an enthusiastic smile as he mimics using the time machine complete with beeping and warping sounds, but goes on to say that the bullying in university left him feeling like a "failure" needing change.

That change came when he exploded on to the MMA scene in second tier promotion Pancrase. Blanco turned from social outcast to one of the most exciting prospects in MMA and the Lightweight King of Pancrase.

"(My family) say do what you like and I support them in return. I do this for my family. They have watched my fights recently but in the beginning I didn't tell them (about my MMA career). It was a bit of a secret. I didn't want to make them worried. With my family – they were OK with wrestling but with MMA, I thought they would be worried. My father is OK with it but my mother worries."

Blanco's family have little reason to worry. The only man to really defeat the Venezuelan had 24 fights under his belt versus Blanco's two. Other opponents generally end up unconscious or being saved by the referee although two of those wins were scratched due to illegal strikes during the explosion that goes off when Blanco senses a finish.

"During a fight I switch on. I forget who I am. I fight to survive with my full power and my full strength. After I win I feel like a bomb and I can't stop myself. That is something that I need to be aware of and I need to be careful of."

Watching Blanco train is a remarkable experience. The heavy bag swings up to the roof as he runs at it from across the room and smashes into it with flailing limbs. Blanco closes his eyes and laughs as he works almost wing chun style chain punches on the mitts. Strength training is done by picking up a heavyweight Bulgarian wrestler and attempting to hoist him overhead. His is a style that cannot be taught but his KO rate says that it's effective.

"I watch a lot of TV. I watch and memorize things. Action movies – Jackie Chan, Steven Seagal, Jean Claude Van Damme. I love them. I have actually been thinking about some new techniques but they are too dangerous."

At Sengoku 13 Blanco faced his toughest test to date in Rodrigo Damm. The Brazilian's dangerous combination of world class jiu-jitsu and wrestling led to Blanco's corner believing that some kind of strategy was in order.

"I was getting a lot of advice to look out for him as he was such an experienced fighter. That's why I got hit a lot (in the first round).

Blanco attempted to be technical with his striking and tried to fight like a more orthodox fighter. He seemed uncomfortable. When Blanco returned to his corner at the end of the first round I overhead him ask why he had to let Damm kick his legs. He trainers pleaded with him to continue being careful.

"In the second round I couldn't be bothered waiting anymore so I went with my style."

45 seconds of Blanco's style led to a referee stoppage victory.

At Sengoku 15 on October 30th, Blanco will face another world class jiu-jistu champion in Leonardo Santos. Sengoku brass have told him that if he gets past this opponent he will be fighting for vacant SRC Lightweight Title.

Whether it is possible to curb Blanco's savagery into strategy remains to be seen but it may not even matter. His ability to knock out an opponent with every single strike, relentless offense and elite level wrestling make him a threat to any opposition and perhaps the most exciting prospect fighting in Japan today.