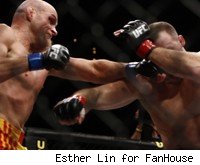 Steve Armstrong's night was nearly over. The Texas Department of Licensing and Regulation referee had just presided over the Shark Fights 13 co-main event, and now he was waiting to do his last pre-fight check over main event participant Keith Jardine.

Armstrong waited in the aisle of the Amarillo Civic Center as Jardine threw his arms up for the cheering crowd and approached him. As they intersected, Armstrong stopped Jardine with his right hand in order to begin his mandatory check. In a flash, Jardine pushed Armstrong's hand away and then stared at the veteran referee for a beat before shoving him backwards.

That quick exchange, which took just 2.5 seconds in real time, landed Jardine an indefinite suspension at the hands of the state's athletic sanctioning body, TDLR. In an interview with MMA Fighting, Armstrong explained how the incident took place and his thoughts on the actions that landed the MMA veteran in hot water.

"I think he was zoning," said Armstrong, who has been a referee in Texas for five years, but has been around martial arts since 1973. "He was fixing to fight a big fight. I was trying to stop him, and he smirked and pushed me. I said, 'You push me again, you're DQ'd.' Then he patted my shoulder like he realized what was going on. I think he got caught in the moment."

Armstrong says that prior to fight weekend, the two had never met in person. But on Friday, Sept. 10 -- the night before the show -- Armstrong was introduced to the night's 20 fighters as one of the referees during a standard rules meeting. During that time, Armstrong says he was in the same room with Jardine for "about 15 minutes," so while he was not exactly a familiar face, he shouldn't have been a completely foreign one either.

After officiating hundreds of bouts, Armstrong says he had never before been involved in a situation like the one that unfolded before Jardine's fight. And if it was up to him, he probably would have let it go without a further thought. Unfortunately for Jardine, the shove occurred just a few feet away from TDLR members, who were sitting cageside.


"They saw it," said Armstrong. "I don't know if I would've even brought it up. But the commissioner and assistant commissioner were sitting 10 feet away so they were watching the whole thing. They asked me why he pushed me. I said, 'I don't know.' And I really don't know. It wasn't something I did, that's for sure."

Messages left for Jardine went unreturned, but his manager told MMA Weekly in the wake of the incident that Jardine confused Armstrong for a fan after being grabbed by other fans while walking to the cage.

Armstrong says that as a veteran of over 20 fights, Jardine should have been well aware that the pre-fight check was coming as he neared the cage. And that even if he had been a fan, fighters shouldn't be shoving fans, either.

"He's got a lot of fights, he should know better," he said. "There's no excuse but I didn't want to see him get suspended indefinitely. I just wanted to know, 'Hey, do you have a mouthpiece and a cup on?' In every fight that's checked, so this is nothing new to Keith. We're always going to look at your gloves and do those checks. That's all very standard, going through that checkpoint."

While Jardine -- who went on to lose the fight, his fifth straight loss -- was given an indefinite suspension, he's likely going to have to state his case in front of TDLR members before they reinstate his license. In addition, most states that sanction MMA usually honor suspensions initiated by other state sanctioning bodies, so Jardine may have limited options for competition until a suspension is decided upon.

MMA Fighting spoke to one state athletic commission department head -- Nevada state executive director Keith Kizer -- who said while in MMA, honoring suspensions is not automatic, his influential state, like many others, often does so.

"I've never known us to not give reciprocity and honor suspensions for any sport for unsportsmanlike conduct," he said.

Meanwhile, Armstrong hopes the moment becomes just a sidenote to Jardine's career while serving as a warning to other athletes about cageside behavior.

"I think the state doesn't want anyone else to do this, so they may be making a statement that this is not the way you conduct yourself," Armstrong said. "And it's true, you have to conduct yourself as a professional. But I believe everyone makes mistakes. You'd have to look at his career and see if he has a habit of doing these things. If it's his first offense, it's not a habitual thing. He seems like pretty much a gentleman. I think he got carried away in a big moment, in a big fight. I wish him the best. I didn't take it personally, but it's not up to me."