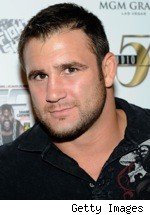 Count Phil Baroni among those who aren't impressed by Chael Sonnen's recent, for lack of a better word, trash-talk.

"He's reading the book that I wrote. It's out of style," Baroni said on Thursday's episode of The MMA Hour.

"I don't like it. I mean, whatever. It's OK. I think that new kid, who just beat Matyushenko [Jon Jones], what he says, that's like a breathe of fresh air. It's nice to see someone talk like him interviews."

Throughout his 10-year career, "The New York Bad Ass" has always been known as one of the more outspoken and eccentric fighters in the sport, so it was somewhat surprising to hear him say that Sonnen is "over the top right now."

He added that Sonnen's recent talk about the likes of Anderson Silva and Georges St-Pierre is "whack. It's lame.

"It's not real. Like, you were talking about me and [Frank] Shamrock -- that was real. This ain't real."

Baroni, who has been nursing a broken collarbone suffered in July, which forced him to pull out of UFC 118, didn't stop there. He also said that he believed Sonnen would find a way to lose his fight at UFC 117 against Silva.

Guess what? Baroni doesn't think Sonnen will do better in the rematch, which is scheduled for Jan. 2011.

"I think he does way worse in the rematch. I could be wrong, I'm not always right, but I think so."

The 34-year-old, who lost in his return to the UFC last November to Amir Sadollah, said that he hopes to return to action -- as a middleweight this time -- in either December or January.

(Ed. note: Watch Thursday's episode of The MMA Hour below. Baroni's take on Sonnen begins at the 23:00 mark.)