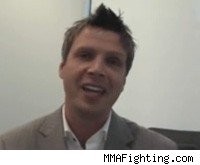 After two-and-a-half years with the company, Jerry Millen is no longer with M-1 Global.

According to a source close to M-1 Global, the separation was amicable and M-1 is open to working with Millen in the future.

The source told MMAFighting.com, "Jerry's role was in production" and "that the shift was M-1 wanting to move more functions from being outsourced to in-house" in Holland.

When asked for comment, Millen told MMAFighting.com Friday, "I resigned."

The departure, which happened "about a month-and-a-half ago" according to Millen, marks the end of a long business relationship with Vadim Finkelstein and Fedor Emelianenko dating back to their days with PRIDE.

Millen worked for PRIDE for seven years and served as the Vice President of its U.S. division at the time of the collapse of the then Japanese-based company. When M-1 Global stepped up its efforts towards event promotion, Millen was hired as the M-1 Global USA VP.