Could Jorge Santiago Be Strikeforce's Next Acquisition? 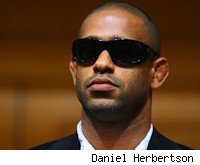 Strikeforce has been very active on the free agent scene this week, signing the likes of Josh Barnett, Paul Daley and Jorge Masvidal to beef up their heavyweight, welterweight and lightweight divisions, respectively.

And while the organization's middleweight division is by far it's deepest, a familiar face is looking to get back into the mix once again.

Jorge Santiago, the Sengoku middleweight champion, who won the Strikeforce middleweight Grand Prix in 2007, is hoping to strike a deal with the organization in the near future, according to his manager Alex Davis.

"Let's put it this way, of course, I think Strikeforce would be more than happy to have him," Davis said on Monday's episode of The MMA Hour. "He's probably the top 185er outside of the UFC, and they're very interested in him. But they have not decided exactly how they are going to set up their 185 [tournament]. Is it going to be an eight-man, is it going to be a four-man? So right now, we're waiting for what they are going to plan out so we can see how Jorge fits in there."

Strikeforce's potential 185-pound tournament has been talked about since it was clear former champion Jake Shields was going to sign with the UFC several months ago, but while most believed it would kick off in some form by October, that remains to be seen at this point.

Regardless, Davis said Santiago wants to fight again for Strikeforce because that would allow him the opportunity to continue defending his Sengoku title.

When MMA Fighting contacted Strikeforce officials about the possibility of signing the 23-8 Santiago, they admitted to being in dialogue with his management team, but that they were far from striking a deal.

Santiago is coming off a thrilling win over Kazuo Misaki at SRC 14 last month. The back-and-forth brawl is currently atop many Fight of the Year lists.

The American Top Team Member has won 11 of his 12 fights. His lone loss was a shocking first round upset to Mamed Khalidov last November, which he avenged in March.

In November 2007 he defeated Sean Salmon and Trevor Prangley on the same night to win the Strikeforce middleweight Grand Prix, but those were the only two fights he had in the organization.

The MMA veteran has bounced around many organizations, including the UFC, where he went 1-2.