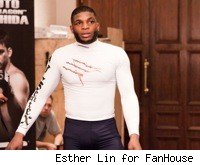 A long-rumored deal between Paul Daley and Strikeforce has officially been finalized.

MMA Fighting has confirmed with Strikeforce director of communications Mike Afromowitz that the former UFC and EliteXC welterweight contender has signed a multi-fight contract with the organization.

The organization has yet to decided when the British fighter will make his Strikeforce debut.

Daley (25-9-2) is 2-0 since getting released from the UFC moments after he punched Josh Koscheck right after the final bell at UFC 113 in May.

At the post-fight press conference, UFC president Dana White said that, as a of a result of Daley's actions, "Semtex" would never fight again inside the Octagon.

"There's no excuse for that. These guys are professional athletes. You don't ever hit a guy blatantly after the bell like that, whether you're frustrated or not. It was probably one of the dumbest things I've ever seen because he is a talented guy, and he is one of the best 170-pounders in the world."

So Daley moved on, and picked up a win in July at Impact FC 2 in Australia against Daniel Acacio.

The former Cage Rage champion rose to prominence in the North American MMA scene when he fought Jake Shields for the EliteXC 170-pound belt on CBS in October 2008. Unfortunately for Daley, was submitted in the second round by Shields.