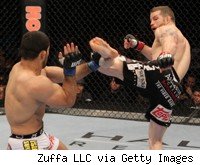 Rousimar Palhares didn't even wait until his match with Nate Marquardt was over to accuse him of greasing. Palhares' instinctive reaction ended up costing him the bout as Marquardt seized the opening left by his protesting opponent to inflict some fight-ending ground and pound.

While Marquardt was quickly cleared by Texas Department of Licensing and Regulation officials, the bizarre ending and ensuing controversy couldn't help but take some of the luster off Marquardt's win. But the UFC middleweight star holds no ill will towards the man he beat at UFN 22.

"I've heard in interviews he apologized and stuff," Marquardt told Ariel Helwani on Thursday's edition of The MMA Hour. "I'm sure he didn't mean anything by it. He was probably just disappointed. I don't know."

Marquardt said he developed a plan to specifically prepare for Palhares' dreaded leglocks. Aside from his pre-fight work focusing on defending the submissions, on fight night, he worked up a sweat for 45 minutes prior to the bout. That sweat helped him pull out of the move.
He took his eyes off me. That's a big no-no in the fight. You've got to keep your eyes on your opponent.
-- Nate Marquardt
"The reason I warmed up really well, I knew he's very explosive in the first three minutes of fight, so as soon as I got out to the fight, I had to be ready to fight right from the start," Marquardt told MMA Fighting's Ariel Helwani. "I didn't have time to warm up during the fight. I had to be ready for the fight in the first minute. We drilled those escapes over and over. I did the escape perfectly."

As Marquardt (30-9-2) pulled his right leg free, Palhares looked off to the side and put his right hand up, likely in search of someone who might consider his silent protest. That began a strange series of events that led to Marquardt taking the opportunity to dive in and blast Palhares with a straight right before following with 17 unanswered strikes before Dean called a stop to the action.

"Honestly I didn't know what he was doing or I wasn't even thinking about it," Marquardt said. "I was just focused on the fight. All of the sudden, I realized there was an opening to attack him. He took his eyes off me. That's a big no-no in the fight. You've got to keep your eyes on your opponent."

Seconds after the fight was called to a halt, Palhares got off the canvas and walked over to Marquardt. After a quick embrace between the two, Palhares pointed down towards Marquardt's ankles.

Marquardt could clearly be seen shaking his head at the insinuation, and quickly offered his leg for examination to Palhares, who instead turned and walked away. A blink later, Marquardt offered his legs to Dean, who bent over to search for any illegal subtance.

For the second time of the night, Marquardt was cleared of having any foreign substance on him.

"First of all, they checked me right before the fight," he said. "As I walked in, they check if you have your mouthpiece, your cup, they wipe your whole body down. They check your gloves, on your arms, on your shoulders, on your legs, behind your neck. So they had already checked me. After he accused me of that, then the referee, the doctor and the commissioner all checked me right there in the ring. I was fine with it. It would've been impossible to dry it off or something. They all said I didn't have any grease on me."

After rebounding from his last fight, a loss to Chael Sonnen, Marquardt hopes to get right back into action soon. Saying he'd like to fight someone like Wanderlei Silva, Michael Bisping, or even fill in if any fighter drops out of the upcoming Vitor Belfort-Yushin Okami and Chael Sonnen-Anderson Silva bouts, Marquardt said he didn't hold anything against Palhares after hearing he'd apologized in post-fight interviews.

The way he sees it, the fight was going to end the same way regardless of whether or not Palhares lost his focus.

"I really felt like I was getting his timing down really quickly in the fight and it was just a matter of time before it happened," Marquardt said. "It kind of takes away from it when people are trying to say he wasn't fighting me when I hit him. I was in the fight every second of the fight. It's not my fault that he got distracted."
(Ed. note: Watch Thursday's episode of The MMA Hour below.)