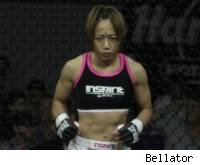 The owner of the longest winning streak in mixed martial arts will put the historic stretch on the line again, along with a spot in the Bellator 115-pound women's tournament finale, when Megumi Fujii takes on Lisa Ward at Bellator 31.

The promotion confirmed the Sept. 30 matchup on Thursday morning.

Fujii, the owner of a stunning 21-0 record, will square off with Ward in Lake Charles, Louisiana, in what is actually a rematch of a 2007 bout that saw the unbeaten Japanese sensation win by first-round arm bar.

At the time, there was mild controversy surrounding the result, as Ward claimed she never tapped out to the submission hold.

Like Fujii, Ward is a submission specialist with 10 of her 14 wins coming via tapout. She is 14-5 overall and earned her spot in the semifinals with a decision win over Aisling Daly in August.

Fujii captured her spot in the semis with an arm bar submission over Carla Esparza at Bellator 24. Incredibly, Fujii has finished nine straight opponents, and 16 of her last 17 foes overall.

The bout will take place at L'Auberge Du Lac Casino and Resort.

Zoila Frausto and Jessica Aguilar will face off in the other women's semifinal, which is scheduled for the same night.