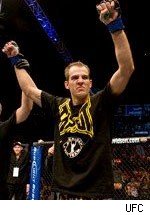 I don't know about you, but when I sit through a bunch of commercials encouraging me to play an endless stream of video games on my rented TV while eating a fast-food breakfast, I expect to be rewarded with some quality fights. Fortunately, last night's UFC Fight Night event didn't let me down, even if I still woke up and ate a banana this morning instead of a 500-calorie grease bowl.

The big lesson we learned from last night's fights is that if you are in a situation where another human being is trying to hurt you, it's probably best to keep your attention on that person at all times. Don't look away. Don't get distracted by your oppnent's soft, slippery smooth skin. Don't assume that he would never hit a person who isn't making direct eye contact with him. He totally will, and it will totally be your fault when he does.

Rousimar Palhares learned that lesson at the hands of Nate Marquardt last night, and he learned it in painful fashion. Let's just hope he only has to learn it once. Now, on to the big winners, losers, and everything in between from last night's fights.

Biggest Winner: Cole Miller
He came in as a 2-1 underdog against the TUF 9 winner Pearson, but he left with one of the two Submission of the Night bonuses in his pocket and the talk of title contention on his lips. The latter might be a little premature, seeing as how this brings his current win streak to a fairly mediocre two (and he has yet to win more than two in a row in the Octagon at any point in his career), but it never hurts your chances to put away a well-known opponent on Spike TV. He deserves a step up in competition after that win. Let's just hope his chin is up for it.

Biggest Loser: Rousimar Palhares
What part of 'protect yourself at all times' did Palhares not understand? Did he think that was only the first half of the statement, with the second half being, '...unless you think he feels greasy'? The commission and referee Herb Dean checked Marquardt's legs after the bout, and so far nobody has stepped forward to level any accusations, but that's not even the point. Say Palhares was right. Say Marquardt was greased up, and that's how he slid out of the leg lock so easily. You'd still better wait for a break in the action before you try to have a conversation with your corner about it.

Biggest Step Forward: Charles Oliveira
MMA isn't like boxing; an undefeated record in this sport only means something if you beat quality guys to get it. Up until last night, Oliveira had tapped out a bunch of Brazilian fighters no American fans have heard of, plus one lower tier UFC fighter. The win over Efrain Escudero was the biggest of his career, and he managed to put on a show in the process. Obviously his stand-up still needs some work, but he's quick, dynamic, and only 20 years old. You can bet the UFC is already telling him to work on his English so they can actually do a decent job of promoting him some day. Somebody get that kid some Rosetta Stone CDs.

Least Helpful Win: Nate Marquardt
It's not his fault, but when your win comes as the direct result of a huge mental blunder on the part of your opponent, it's never going to be the kind of thing that propels you to new heights. Again, that's not exactly fair. Marquardt did what he had to do in that fight, and now you can never accuse him of being afraid to pounce on an opening. Still, he kind of got robbed of the chance to put on an impressive performance. Instead of being remembered as a good TKO win for Marquardt, this fight will be remembered as the time Palhares found out the hard way that you can't ask your opponent to hold on a second as you confer with your corner.

Early Frontrunner for the GDP Award: Jared Hamman
He lost the decision to Kyle Kingsbury on the prelims, but Hamman was part of his second straight Fight of the Night in the UFC. The extra $40,000 he made for the scrap with Kingsbury now brings his bonus total for the year to a cool $100,000, and that's not even counting his regular contract money. Obviously he'd rather be on the winning end of these thrilling fights whenever possible, but when you can't have success, cash is a pretty decent substitute.

Least Ambitious: Jim Miller
In almost all areas, the smaller of the Miller brothers seems like a fighter from another era. He's got a physique like an old-timey catch wrestler (with the facial hair to match), and when he wins he can't bring himself to call anybody out and drum up a good fight for himself next. His only two career losses are to Gray Maynard and Frankie Edgar – officially the top two lightweights in the UFC at present – and yet when asked about it in the post-fight presser, Miller said he thinks there's still a few guys up there ahead of him. And this is from a guy who's won five straight. Am I the only one who thinks Jim Miller and Cole Miller could both benefit from swapping attitudes?