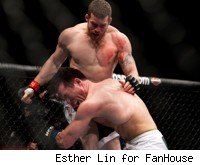 The UFC is back on Spike Wednesday night for a live event that's intended mostly as a lead-in to the start of Season 12 of The Ultimate Fighter, but also happens to be a good card with four fights that should be close and competitive.

Nate Marquardt vs. Rousimar Palhares
Marquardt is trying to bounce back from a beating at the hands of Chael Sonnen in his last fight, and he'll do it against Palhares, the Brazilian jiu jitsu specialist who has submitted most of his opponents, including the last two by heel hook. I like Marquardt to stay off the ground and use his improved striking to knock Palhares out.
Pick: Marquardt

Efrain Escudero vs. Charles Oliveira
This is a great fight between a couple of good young prospects. Escudero, the former Ultimate Fighter winner, was beaten by Evan Dunham in January but bounced back nicely by beating Dan Lauzon in May. Oliveira is 13-0 and coming off a great submission victory in his UFC debut just six weeks ago. Escudero represents the toughest test yet for Oliveira, but I think it's a test Oliveira will pass with flying colors.
Pick: Oliveira

Jim Miller vs. Gleison Tibau
I consider Miller one of the most underrated fighters in the sport. He's 17-2 in his career, and his two losses are decisions to the two best lightweights in MMA, Frankie Edgar and Gray Maynard. Tibau represents a particularly interesting challenge to Miller because Tibau is good at all the same things Miller is good at, but I expect Miller to win a decision.
Pick: Miller

Ross Pearson vs. Cole Miller
Pearson is now 2-0 in the Octagon since winning Season 9 of The Ultimate Fighter. I'm tempted to pick Miller to pull an upset and submit Pearson, but I think Pearson's striking and takedown defense will prove to be enough to win a decision in a fight that stays mostly standing up.
Pick: Pearson