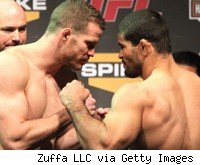 This is the UFC Fight Night 22 live blog for Nate Marquardt vs. Rousimar Palhares, a middleweight bout and main event of tonight's UFC on Spike TV event from the Frank Erwin Center in Austin, Texas.

Marquardt (29-9-2) begins his road back to title contention after losing a No. 1 contender bout to Chael Sonnen in February. Palhares (11-2) has won three straight in the UFC and has finished his last two by way of heel hook.


Herb Dean is the referee for tonight's main event.

Round 1: Palhares keeps his stance low in search of a takedown. Marquardt is keen to it, keeping his hands low and maintaining a healthy distance. Palhares shoots a takedown halfway into the round. Marquardt throws up a triangle but Palhares stays on top. Palhares sits back for a leglock and Marquardt quickly frees his leg. Palhares turns to point out and claim that Marquardt's leg was greased. Marquardt takes advantage of Palhares looking away and lands a right punch to stun Marquardt. Marquardt pounds away for the referee stoppage.

The commission and referee checked Marquardt after the fight and declared that Marquardt was clean. That ends that.