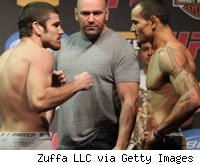 This is the UFC Fight Night 22 live blog for Jim Miller vs. Gleison Tibau, a lightweight bout on tonight's UFC on Spike TV event from the Frank Erwin Center in Austin, Texas.

Newly-promoted Brazilian jiu-jitsu black belt Miller (17-2) is seven of eight in the UFC, with the lone loss a decision to current No. 1 contender Gray Maynard. Meanwhile, Tibau (21-6) is seven of 10 in the UFC and coming off wins against Josh Neer and Caol Uno.


Round 1: Tibau boxes and Miller blocks. Miller extends a leg for a kick and Tibau catches it to put Miller on his back. Miller works his way back to his feet. Miller connects on a jab that stuns Tibau. They clinch and Tibau recovers to secure a dominant takedown. Miller grabs for a choke, but Tibau defends and they are back fighting for position in clinch. Tibau separates halfway through the round. Miller not afraid to throw with Tibau. Another kick almost gives Tibau the opportunity to take Miller down, but Miller recomposes his balance. More clinch work and then Tibau catches another kick, this time throwing a counter punch instead. Tibau catches another kick and throws a straight left. Miller is getting through with left hands. TIbau connects on a counter left.

10-9 for Miller, who rocked Tibau and landed better shots towards the end of round.

Round 2: TIbau comes forward with right, left, right, left punches that Miller blocks. The southpaw Miller stuns Tibau with an overhand left. Miller chases after Tibau. Miller lands a flying knee to the body and then switches for a takedown. Tibau defends with his back against the fence and then reverses position with a little over three minutes left in the round. Tibau takes down Miller strong with 2:30 left in the round. Miller stays active and Tibau stands back up. Miller gets through with a right in an exchange. Miller shoots at 0:39 and misses. Tibau shoots eight seconds later and gets the takedown easily. The second round ends with Tibau inside the guard of Miller.

Despite Tibau's takedowns, Miller still up on my scorecard in round two. 10-9 Miller.

Round 3: Tibau double jabs and gets through with a straight left. Miller lands a leg kick and blocks Tibau's counterpunch. Miller chases Tibau down and they clinch. Miller misses a knee to breakaway from clinch. Miller gets through with a jab. Miller defends a takedown. MIller likes to rush in with punches to close the distance but Tibau hasn't found a way to capitalize on that. Miller shoots and Tibau defends, eventually swimming his way out. Tibau shoots and Miller defends in clinch. The referee separates them and the fight resumes at 0:42. Miller shoots and is stuffed. Miller comes forward with a punch combo. And again. Tibau shoots with 14 seconds left and is shrugged off. Tibau clinches and the fight ends with Miller working from his back against the fence.