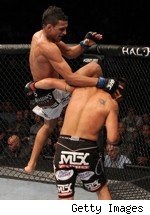 This is the UFC Fight Night 22 live blog for Efrain Escudero vs. Charles Oliveira, a catchweight bout on tonight's UFC on Spike TV event from the Frank Erwin Center in Austin, Texas.

Escudero (13-1), the winner of season eight's The Ultimate Fighter, suffered his first career loss in January against Evan Dunham and bounced back with a victory over Dan Lauzon in May. Oliveira (13-0) is a jiu-jitsu guy who impressed in his UFC debut at UFC on Versus 2 in August, tapping out Darren Elkins with an armbar and in the process earned the Submission of the Night.


Originally scheduled for 155 pounds, Escudero failed to make weight Tuesday and decided to forfeit 20% of his purse rather than lessen his chances of winning by forcing the weight cut.

Kerry Hatley is the referee.

Round 2: Oliveira throws a long right and Escudero lands an uppercut to counter. Oliveira grabs a leg and kick-sweeps Escudero's left leg to put him down. However, Escudero takes Oliveira's back. Oliveira slides off and Escudero gets to his feet to bring the fight back up to standing. Oliveira lands leg kicks. He gets through with a short left. Oliveira throws a jumping knee. Escudero holds a bodylock and tries to drag him down but Oliveira stops it. Oliveira connects on another leg kick. Oliveira hits a front kick and then a kick to the body. Oliveira shimmies and lands two leg kicks. Escudero is still smiling, but he's clearly losing the round. Oliveira with another leg kick that Escudero has no answer for. Oliveira with a front kick followed by a flying knee. Oliveira taps an inside leg kick for the final offense of the second round.

Round 3: They touch hands and hug. An accidental kick to the groin and there's a brief rest period for Escudero. They hug again before resuming the fight. Escudero lands a rare leg kick. Oliveira lands a front kick. Oliveira is too fast and too long for Escudero to find a clean target. Oliveira lands a running knee to the body and clinches. Escudero accidentally returns the favor, kneeing Oliveira in the groin. Oliveira signals to the referee the low blow and sits down to take a rest. This could benefit Escudero, who now has more time to rest and recover from leg kicks. The fight resumes with 3:17 left and Escudero pushes the pace with combos. Oliveira catches a kick and powerfully takes Escudero down with the help of the cage! Escudero quickly stands up and Oliveira floats over Escudero's back for a choke. Escudero taps standing! On this night at least, BJJ beats, as Oliveira would say, "the wrestling."

That was quite a showing for Oliveira. And the dude is only 20 years old. Composed, quick and his submission game is something else.