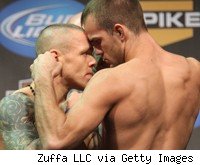 This is the UFC Fight Night 22 live blog for Cole Miller vs. Ross Pearson, a lightweight bout on tonight's UFC on Spike TV event from the Frank Erwin Center in Austin, Texas.

Pearson (11-3) was the winner of season nine's The Ultimate Fighter and is so far unbeaten in his UFC career. Miller (16-4), who is returning from an injury which forced him out of a planned bout in March, was last seen inside the Octagon in January in an impressive submission win over Dan Lauzon at UFC 108.


In addition to his usual training at Team Roughhouse in the UK, Pearson prepared for this fight in New York with lightweight champion Frankie Edgar and the Rutgers wrestling team and at Wanderlei Silva's gym in Las Vegas.

Herb Dean is the referee.

Round 1: Pearson opens with a leg kick against the much taller Miller. Pearson jumps forward with a punch and gets countered by a straight right. Pearson surprised there for a moment but he goes back to asserting his striking. Miller shoots at around 3:40 for the single-leg; MIller drags him down a moment, but Pearson stands back up. Pearson with a strong leg kick. Miller quickly jumps guard and releases it. Miller uses his reach advantage to make up for Pearson's better striking. Pearson picks his shots and is able to land jabs and leg kicks. Miller throws a leg kick and Pearson puts a combo together to counter. Both fighters stay active with Pearson pushing the pace while Miller sticking more towards leg kicks and countering with a straight left.

Could have gone either way. I'm leaning towards Pearson for the 10-9 first round.

Round 2: Miller shoots and pulls guard. Pearson stays on top as Miller looks for a sweep. Pearson steps away and asks Miller to stand back up. Miller throws a flying knee that misses, but throws a combo, dropping Pearson with a left hook! Miller follows with right hand and takes Pearson's back to tap him out with a rear-naked choke.

Miller was way high on Pearson, but Pearson was out of it and submitted quickly.