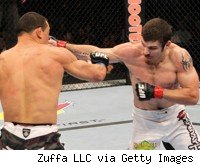 As he continues to climb up the lightweight ladder, Jim Miller notched another big win Wednesday night with a hard-fought decision over Gleison Tibau fought at UFC Fight Night 22.

The judges scored the fight 30-27, 30-27 and 29-28 for Miller, and although the fight was a little closer than those scores would suggest, it was still a very good showing for Miller, who is now 18-2, with his only two losses coming by decision to the two best lightweights in the world, Frankie Edgar and Gray Maynard.


Miller wins most of his fights by submission, but his striking looked good against Tibau, especially in the second round when he landed a huge left hand early that had Tibau badly hurt. In fact, if anything Miller's biggest problem in the fight was that he didn't trust his striking enough: He made a tactical error in going for a submission after he hurt Tibau, and then clinched with Tibau for more than a minute and gave his injured opponent time to recover.

So Miller showed that he could stand to develop more of a killer instinct, but he also showed that he's a complete fighter who's capable of controlling a bigger, stronger man who's every bit as good a grappler in Tibau. Miller is now on a five-fight winning streak since losing to Maynard a year and a half ago, and he's got big fights ahead of him.