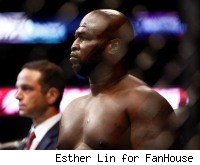 Ever since Randy Couture turned his lights out with a triangle choke submission at UFC 118, James Toney has been relatively quiet. But the Motor City mouth that scored him his first foray into the UFC cage is beginning to roar once again.

Speaking to FightHype.com, Toney said that he's interested in taking another shot at the octagon. And he even has a date in mind: UFC 123, which is scheduled to take place in a suburb near his hometown of Detroit.

While the evening's festitivies will be headlined by a main event pitting former light-heavyweight champs Quinton "Rampage" Jackson and Lyoto Machida, Toney thinks he'd be a better alternative as a drawing card.

"If they want to sell any tickets in Detroit, they should put me on there," Toney said. "B---- a-- Rampage can't sell no tickets in my hometown."

As first confirmed by MMA Fighting, the November 20 card will take place at The Palace of Auburn Hills, less than 20 miles outside of Detroit.

Meanwhile, Toney also told the site that he'd like UFC president Dana White to promote his next boxing fight, but only to spite the boxing establishment.

After over a one-year hiatus from the squared circle, Toney had voiced his plans to box in October, less than two months after his UFC 118 bout with Couture, but with time running short, no return to the sweet science has yet to be announced for the multi-division champion, and his options appear to be dwindling.

A return to the UFC cage seems just as improbable. Shortly after UFC 118, White effectively closed the book on Toney's UFC career, saying he was one and done.

"He's a boxer and that's what he does," White said a few hours after Toney submitted to Couture. "He wanted to fight, he picked a fight with our guys and he fought tonight. He's a tough guy, he's been around. I have a lot of respect for him, but you can't expect a guy to come in with one discipline and do well. He stepped up, he came in and did it. He picked a fight and he got one."

Toney made a guaranteed purse of $500,000 for what turned out to be a three-minute, 19-second appearance in the co-main event.