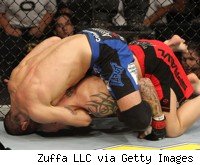 Miller turned the fight around with a sensational comeback in the second, winning a great fight to start off the night's televised card, and he said afterward that he was proud to have finished his fight.

"I'm just happy I came out here and did what I said I was going to do," Miller said. "I see all these wrestlers, point fighting strikers and lay and pray jiu jitsu guys all doing the same thing. Nobody tries to finish, pass guard, mount, nothing, just control the clock. This ain't football. People got to come in here and fight."


The first fight was almost entirely a stand-up battle, where Pearson had the edge. Although Miller did very briefly get Pearson down against the fence, Pearson had no trouble at all standing back up and was never in any danger. Pearson's striking was more effective and he generally stayed out of the way of Miller's reach advantage, and that's how he won the first round on my scorecard.

But in the second it was Miller who got the better of the striking, hitting Pearson with a hard punch, throwing Pearson off balance by attacking with a flying knee, and then leveling Pearson with a big left hand. Once Pearson hit the deck Miller pounced, sunk in a rear naked choke, and got Pearson to tap.

The win improves Miller's record to 17-4 and shows once again that he's one of the best submission specialists in the lightweight division -- he's now won 12 fights by submission. Pearson, who falls to 11-4, will need to go back to the drawing board.