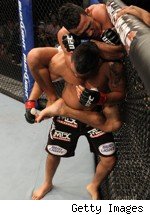 One of the most exciting young prospects in mixed martial arts got the biggest win of his career Wednesday night at UFC Fight Night 22, as Charles Oliveira beat Efrain Escudero with a beautiful standing rear-naked choke in the third round of what had been a very competitive fight.

At the age of 20, the Brazilian Oliveira has already developed a well-rounded game, as he showed against Escudero by hurting him standing up with an array of kicks before eventually using his excellent jiu jitsu to win by submission. Escudero also has a little bit of a mean streak in him, as he really went for the kill in the third round after Escudero hurt him with a knee to the groin. At one point in the second round Oliveira even did a little Anderson Silva routine, dancing around in front of Escudero and then interrupting the dancing to land a couple strikes.


Oliveira improved his record to 14-0 with the victory, and although the UFC will want to bring him along slowly, he looks like he's ready for some of the top fighters in the lightweight division. There aren't any limits to how good Oliveira can be.

Escudero, the former Ultimate Fighter winner, dropped to 13-2 and has now lost two of his last three, to two of the best young prospects in the sport in Oliveira and Evan Dunham. There's no shame in either of those losses, but there's also no question that Escudero has been leapfrogged on the list of the top young lightweights in MMA. Oliveira is a star on the rise.