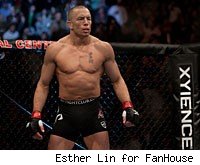 It's still three months away from the date when Georges St. Pierre and Josh Koscheck can fight for real, but the UFC welterweight champion and No. 1 contender are already beginning the verbal sparring that often precedes a title match.

That's not so surprising from Koscheck, who has never shied away from controversy and has fully embraced the villain role handed to him after the UFC chose to stage the UFC 124 main event in Montreal -- St. Pierre's hometown.

It's a little bit more shocking from St. Pierre, who rarely chooses to engage in word games, often admitting that it's something at which he's just not very good.

On Tuesday though, St. Pierre accused Koscheck of lying about three separate statements made on a conference call which was ostensibly scheduled to hype Wednesday's season premiere of The Ultimate Fighter, but predictably became much more about season 12's payoff: the Dec. 11 title match.

While it seems clear that on some level, Koscheck's managed to get under St. Pierre's skin, the question is whether that's good or bad. St. Pierre says it's the former.

"He's definitely going to get in my head, which is a good thing for me," St. Pierre said. "If you look at all the guys that I fought in the past who have been very arrogant with me, I did very well. They got in my head and gave me more motivation to train hard. When the time to fight has come, I will have done my homework, I guarantee."

Koscheck didn't let up in the early part of the call, saying St. Pierre was "wasting a lot of his money and a lot of his time" in working his striking because in Koscheck's opinion, St. Pierre has no desire to exchange on the feet. Later, he continued on the point, saying, "since GSP got knocked out by little Matt Serra, he's become this guy who's afraid to go out there and fight."

It became a constant theme, and at one point, Koscheck came out and finally stated what he'd been implying all along.

"I know that you're just a wrestler, and that's all you want to do," he said.

Saying he was coming in to make the match a "fight," Koscheck noted that he was the last man to take a round from St. Pierre, back in the first round of their first meeting at UFC 74.

Around midway through the call, things got a bit more genial when St. Pierre explained a recent characterization of the match as good guy vs. bad guy.

"I don't think Josh Koscheck is a bad person," he said. "His character when he fights, he likes to promote, provoke and make it more exciting. That's what he does. I don't think he's a bad guy. It's just an expression, bad guy vs. good guy."

Even that backfired though when Koscheck thanked St. Pierre for sticking up for him, then added, "I'll send you a text message later and we can cuddle."

Koscheck admitted it's been a lifelong trait to stir the pot, saying he was always good at it and it's a trait that serves him well in his current career.

"I'm here at end of day to make money, guys," he said. "I'm here to win fights and make money. Whether they love me or hate me, as long as they pick one."

On Dec. 11, he knows exactly which side the fans will be picking. St. Pierre has become something of a national hero in Canada, and he's a huge star in the French-speaking province of Quebec, where he'll soon be defending his title with about 21,000 of his closest friends in his corner.

"I feel like me and Montreal have a good relationship," said Koscheck, who was roundly booed in the city's Bell Centre after beating Paul Daley to earn the title shot against St. Pierre. "They need a guy like me to come in there and put on a show, and I plan on doing that on Dec. 11."