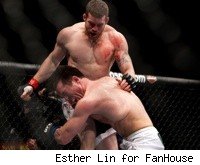 In case you were wondering, no, Nate Marquardt has not completely put his loss to Chael Sonnen at UFC 109 behind him. It's still there in the back of his mind. Certain aspects of it still bug him. But that's okay, he says. Hanging on to a loss isn't always a bad thing.

"You always have to look forward, but that doesn't always mean putting it completely behind you," Marquardt (29-9-2) told MMA Fighting. "It means looking at it and seeing why it happened and fixing your mistakes. I made technical mistakes and I made tactical mistakes, and that's what cost me the fight."

It cost him not only the victory, but also a title shot against his old nemesis, UFC middleweight champ Anderson Silva. Marquardt came into the cage that night as a heavy favorite to beat Sonnen and claim the number one contender spot. Fifteen minutes later, Sonnen was bloodied and battered, but Marquardt was declared the loser via unanimous decision.

It's hard for Marquardt not to replay certain moments from the fight in his head. The way it ended, with him firmly in control and close to putting Sonnen away, that's the kind of thing that might keep a man up at night.

"For sure, I was close to finishing him a couple times," said Marquardt. "I had the knee that knocked him out for a second and then he recovered and I made the mistake and ran right into him and he took me down. The guillotine at the end, he was basically out and I made a technical mistake. ...Definitely it was disappointing, especially with the way the end of fight went. I felt like I had him and I just ran out of time. But really it was my fault for letting it get that far. I have to look at why and how the fight got that way and fix my mistakes."

The best way to get over a loss is to replace its bitter memory with a victory. That's what Marquardt will try to do at Wednesday night's UFC Fight Night event in Austin, Texas, where he takes on Brazilian Rousimar Palhares (11-2).

Even though he's on a three-fight win streak in the UFC, Palhares has gotten himself noticed for the wrong reasons lately. In his last fight at UFC 111, he slapped a heel hook submission on Tomasz Drwal and then was slow about releasing it even after Drwal tapped and the referee intervened to stop the bout.

In and of itself, the incident was a minor one. But it's not the first time Palhares has been accused of holding on to a submission. The athletic commission in New Jersey opted to suspend him for 90 days for the incident, due in part to his history of doing the same thing in some of his early fights in Brazil.

Marquardt swears he's not concerned about Palhares holding on to any submissions against him, mainly because he's not planning on ending up in any. The last time he was submitted was 2003, when he got caught in a guillotine choke by Ricardo Almeida in Pancrase.

That situation also got heated after a somewhat questionable ending, though since then Marquardt's ground game has improved exponentially, so he doesn't expect Palhares to be relying on his submissions prowess to win this fight.

"I don't think that's necessarily going to be his plan against me. He may watch the Chael Sonnen fight and think, 'I've got to take him down and control him the whole fight and win a decision.' But it doesn't matter what his game plan is. I'm definitely going to stop it."

In a career that's spanned over eleven years and lasted through several different significant changes in the sport, the UFC title is the one major feat that has so far eluded him, and Marquardt admits that he can't feel good about ending his career without it.

And yet, after beginning his career in the late nineties, some part of Marquardt is still just amazed that he can actually make a living at MMA these days.

"What's funny is, I remember when I was like 19 years old, and people were telling me, 'Hey, in 10 years this sport's going to be huge and people will be able to make this much money.' I always loved the sport and believed that it would eventually become popular, but when people would tell me it's going to happen in 10 years, some time in my career, it was always like I didn't want to get my hopes up."

When most kids his age were dipping into the red with student loans, Marquardt said he went into debt just so he could train full-time and focus on his nascent fighting career.

"I believed so much that I would be able to make it to the top, and I didn't want to be fighting guys who were training full-time while I was training and having a day job. I didn't want any kind of disadvantage."

Only now that the sport has blown up far past his own expectations, the 31-year-old Marquardt is facing a bit of a crossroads. If there was ever a time to put together a winning streak and make one more sprint towards the title, it's now. The hard part is remembering that it's not a journey he can make all at once.

On Wednesday, it will be the very dangerous Palhares standing in front of him. If Marquardt doesn't want to end up taking a brand new series of regrets to bed with him each night, he'll have to make the most out of this chance to get back in title contention.