Josh Koscheck Has Grown, Along With 'The Ultimate Fighter' 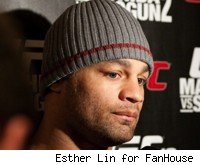 When Josh Koscheck first agreed to take a spot on The Ultimate Fighter, the reality TV show the UFC first began showing on Spike in 2005, he didn't know what to expect. And he certainly didn't know that the show would reach its 12th season, that his own MMA career would progress to the point where he's the coach on that season, and that he'd be months away from fighting for a UFC title.

"I don't think anybody knew that it was going to take off," Koscheck said of that first season. "The UFC didn't know, Spike didn't know, no one in the media knew -- there was pretty much three web sites that covered MMA. When The Ultimate Fighter came out, after the first couple episodes the ratings were huge for the demographics they wanted and they thought they had something, and then the Finale was just off the hook with Forrest Griffin and Stephan Bonnar fighting. That's when we knew it was for real, and now we have an opportunity to make some money as fighters."

Promoting Wednesday's debut of The Ultimate Fighter Season 12, Koscheck took some time this week to talk about how life has changed for him since the success of The Ultimate Fighter Season 1 made him decide to turn life as a cage fighter into a full-time job.
I think if you set a rock beside Georges you could talk to the rock just as easily as you talk to Georges.
-- Josh Koscheck
"As soon as I got off the show I quit my job and knew that I had to train full time to be a successful fighter," Koscheck said. "I took the financial risk of quitting a job and relocating , living in Fresno where I could afford an apartment and train [at the American Kickboxing Academy in San Jose]. I took the risk of not having a job and hoping to live off my fight purses, but by putting myself in the gym 24/7, it paid off."

It wasn't an easy decision for Koscheck, who had a good job and a life he enjoyed, almost 3,000 miles away.

"I was coaching wrestling at University of Buffalo," Koscheck said. "I was pretty pleased with it, had a house and a nice car and thought I had everything going for me and would be a wrestling coach, work on my master's degree, be a student and coach and then maybe go to law school."

But now, Koscheck says the life of a fighter is one he wouldn't trade for anything.

"Who wants to work for the man when you can do this?" Koscheck said.

When Koscheck compares the 28 fighters participating in this season of The Ultimate Fighter to the guys he came up with, he sees the way the sport has evolved.

"The type of fighter who has entered The Ultimate Fighter has definitely changed," he said. "Season 1 it was just guys who were good at one thing. Maybe Diego Sanchez, who had a lot of fights and a lot of experience, knew more than one thing, but everyone else was just good at wrestling or good at kickboxing or good at Muay Thai. It was more simple, the wrestlers and the strikers. Now you see a lot more complete fighters."


Those fighters look up to Koscheck and his rival coach, Georges St. Pierre, as fighters whose career paths they'd like to follow.

"I started out on TUF and now I'm coach and I'll be fighting for the title," Koscheck said. "That gives these guys hope, and so do guys like Forrest Griffin, Rashad Evans and Kenny Florian, the success they've had gives these guys hope that they can be in my position in five years. It's not just a reality TV show. It's a stepping stone to being a successful fighter."

For the UFC, The Ultimate Fighter is a perfect promotional vehicle for two reasons: It helps build up young fighters, and it also helps to promote a pay-per-view bout between the two coaches at the end of the season. Koscheck knows The Ultimate Fighter will help to build up his fight with St. Pierre, but he views the fight as one that doesn't need much promoting.

"The fans are going to want to see me and Georges fight regardless," Koscheck said. "I was the last guy to win a round against GSP, and I'm a better fighter than I was back then (when St. Pierre beat Koscheck by decision three years ago). The fans also want to see drama and personalities, and watch someone like myself -- I'm egotistical and I come across as arrogant and cocky and I can be the villain -- people want to see the villain get his ass kicked by GSP who comes across as squeaky clean and wears a suit."

Koscheck doesn't personally like St. Pierre very much. "I think he's boring," Koscheck said. "I think if you set a rock beside Georges you could talk to the rock just as easily as you talk to Georges."

But he also knows that St. Pierre is a major draw and a fan favorite, especially in his hometown, where their December 11 battle will take place.

"People are absolutely going to want to watch us fight," Koscheck said. "I'm going to Montreal, I'm like Rocky going into Russia to fight Drago. He's going to have 22,000 French Canadians chanting GSP, GSP for as long as the fight lasts."

So how does the fight go down? Will Koscheck, with his collegiate wrestling background, be able to beat St. Pierre, who has won his recent fights by taking opponents down and controlling them on the ground?

"I'd beat Georges in straight wrestling by 10 or 15 points," Koscheck said. "I just would. But in MMA it's different than straight wrestling. There are so many different aspects of it, having to worry about punches and kicks and knees. Georges is definitely one of the best at putting everything together. I have to be on my A game, come in with my wrestling ready to go, be prepared to fight from my back at some point and keep the fight standing as long as possible. Georges wants to out-point me and come out with a boring decision. I've got to make this a fight. A nasty fight, in his face. I believe that with the power I have in my hands, if I get those hands on his face he's going to sleep."

And if that's how it happens, Koscheck will be the champion. Five years after he was just a guy on a reality TV show.