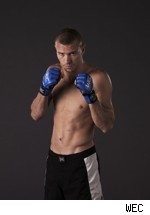 You'd think that after Frank Mir infamously talked himself into a deep, dark hole by wishing death in the cage upon Brock Lesnar, MMA fighters everywhere would have made a mental note to stay away from death threats altogether in their pre-fight smack talk.

The WEC's Donald Cerrone is the latest fighter to map out a murder during a radio broadcast, telling Tapout Radio last night that when he rematches Jamie Varner at WEC 51 later this month, "...I hope my emotions take over and I just kill this dude. I hope this is the first death in MMA."

I guess we can add "Cowboy's" statement to the long list of regrettable remarks that have immediately followed the word 'dude.' Because honestly, if he had stopped there, we probably wouldn't even be talking about it right now.

Cerrone took to his Twitter soon after the incident to apologize to Varner and explain that he "got caught up talking sh-t," though he issued no such apology for also calling Varner a homosexual slur, along with several other unsavory names during the course of the interview, so don't expect Varner to fling his arms open wide to embrace his new best friend.

But Cerrone's blunder again prompts us to ask the question, when does it go from fun smack talk to stupid smack talk? Answer: when it gets too literal.

You can say that you want to kill an opponent, or destroy him, or annihilate him, or, as Cerrone also said in the radio interview, "just rip his face off." That's all fine, mostly because it remains at least plausible that you don't mean those things literally. In fact, the more unrealistic and cartoonishly ridiculous the threat is, the better. We all realize that the rhetoric of fight promotion is a violent one, and we're usually willing to give fighters the benefit of the doubt.

But when you clarify your remarks with an addendum like, "I hope this is the first death in MMA," well, then you've got a problem. At that point we can't pretend that you didn't mean it literally, because you actually took the time to make sure that we knew you meant it literally.

It's kind of like getting stopped for speeding and, when the cop asks if you know how fast you were going, saying, 'At least 20 miles per hour over the posted limit, officer. Maybe more.'

On one hand, you kind of feel for a guy like Cerrone in this situation. It's a little bit absurd that you can walk right up to this line, but can't cross over it. If you say you want to rip your opponent's still beating heart out of his chest and show it to him, that's just good hype. But if you say you hope you kick him so hard that he has a brain aneurysm and dies on the mat right next to the Amp Energy logo, that's a tad too specific.

Is that a little bit hypocritical? Maybe, but it's not like Cerrone can claim ignorance. After Mir felt Zuffa's wrath for making pretty much the exact same statement about Lesnar, almost word for word, every MMA fighter should have considered the prohibition on 'death in the cage' talk firmly established, and for good reason. The last thing a growing sport like MMA needs, particularly when it's still trying to get sanctioned in certain places, is to have competitors talking about their desire to end each other's lives.

At the time of this writing, WEC officials have not responded to a request for comment on the situation. We don't know whether they plan to reprimand or even just verbally scold Cerrone for his gaffe, though it seems like the kind of thing that could be easily swept under the rug, especially after Cerrone got out in front of it with his Twitter apology.

The moral of the story? Think, even just a little bit, before you speak. Say just about anything you want when asked what you plan to do to your next opponent, but don't go out of your way to plan a literally fatal assault, especially when you happen to be on the radio at that very instant.

You'd think that one little rule wouldn't be so difficult to follow. Again, you'd be wrong.