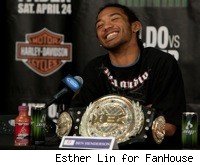 Ben Henderson is gearing up for a potential title defense against Anthony Pettis at the end of the year, but that doesn't mean he doesn't think about how he would match up against the the rest of the world's best lightweights.

When asked on last week's episode of The MMA Hour about a fight against current UFC 155-pound king Frankie Edgar, Henderson appeared very intrigued in matching up against the man he considers to be the best lightweight in the world.

When it comes to MMA, Henderson considers BJ Penn to be one of his "idols." So much so that prior to UFC 118, he predicted Penn would defeat Edgar "via homicide."

Of course, that didn't happen, as Edgar dominated Penn for five straight rounds.

Nevertheless, Henderson has been able to give credit where it's due, even if he didn't like last month's result.

"I thought Frankie did a great job. He does his game plan, he sticks to his game plan. A lot of fighters have a hard time -- their coaching staff doesn't come up with the best game plan -- Frankie's coaching staff, they did a great job, made a great game plan, he stuck to it, which you definitely have to give him credit for. He had the skill to follow through with it, but yeah, I don't know (laughs), it was a good fight. It was a very solid performance for him."

Henderson said that he has yet to sign a contract to fight Anthony Pettis at the WEC's Dec. 16 event in Glendale, Ariz., but considering the fact that he trains just 10 minutes away from the Jobing.com Arena, it's a safe bet that his next title defense will be in the desert.

"Smooth" has won his last 10 fights in a row, but it seems as though his first round submission win over Donald Cerrone at WEC 48 helped gain him a lot more respect in the eyes of the MMA community. So much so that Henderson has finally begun popping up on top-10 lightweight lists.

But don't bother trying to convince the 26-year-old that he is one of the best lightweights in the world. Henderson believes he has a long way to go before he is considered a true player at 155.

The lightweight division is the only shared by sister organizations WEC and UFC. However, no WEC lightweight has been asked to fight in a UFC match, or vice versa.

Regardless, Henderson said he would jump at a chance to fight in the UFC -- against Edgar or anyone else -- even on short notice.

"If the UFC sent me an invitation right now to go fight for one of their guys on the Sept. 15th card, I would cut down the weight and fight whoever they want me to. I would get it done, and I would put on a heck of a show, you better believe that."