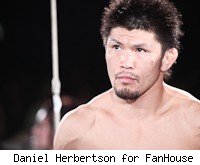 FEG are currently in final stages of negotiation with Norifumi "KID" Yamamoto and it looks as though Caol Uno, Bibiano Fernandes and Joe Warren who were originally planned, will not be participating.