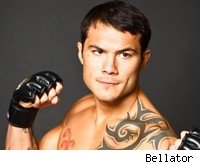 Bellator lightweight champion Eddie Alvarez is ranked by most major MMA sites around No. 7, but if you ask his next challenger, Roger Huerta, he'd see you, and raise you.

"I put him in top three for sure," Huerta told Ariel Helwani on Monday's The MMA Hour.

Calling in on MMAFighting.com's now twice-weekly program, Huerta also revealed that he isn't bothered by the fact that his Bellator 33 fight on Oct. 21 won't be for the promotion's belt.

"I really don't care about the title," Huerta said. "For me it's just getting back up there on the rankings."

A win over Alvarez would conceivably slot Huerta somewhere in the Top 10 in his division, which is something that wasn't supposed to happen this soon following Huerta's surprising loss to Pat Curran in the Bellator lightweight semifinals in May. It was a massive setback for Huerta, whom experts and fans projected would tear through the tournament en route to a title shot against Alvarez.

Huerta, who lost to Curran by unanimous decision, looks back on the fight as another reason why he makes it a priority to finish fights.

"I thought even though I didn't come out and performed at [my best]," he said. "I felt that I still did enough to win, but I guess it was not enough for the judges. For me, it's about never really allowing it to go to [a decision]."

With that considered, Huerta is accepting the loss as a lesson learned as he prepares for Alvarez. Like Huerta, Alvarez fights aggressively and always for a finish. 18 of the champ's 20 wins were either by (T)KO or submission.

"You just can't hold anything back," Huerta said. "You obviously saw what happened to Josh Neer and the other opponents he's faced. But again, he is human, and he is beatable. The things that we're working on, we're going to have to take him out of his comfort zone to win."

MMA fans have clamored for the Huerta-Alvarez showdown ever since Huerta signed with Bellator in March, so when tournament winner Curran was forced to pull out due to an injury, Bellator was quick to capitalize on what will be the biggest fight of the promotion to date.

And although the way the fight came about wasn't exactly the way Huerta had pictured, the Alvarez fight come Oct. 21 will nonetheless be as much of a pivotal one as a title fight would have been.

"It's here, it's here now," Huerta said. "It's been like I've been given another chance and it's one of those things like, 'Alright, this is it. This is for all the marbles. You probably won't ever, ever get a chance like this again.'"

A replay of the Sept. 13 edition of The MMA Hour will be available Tuesday.