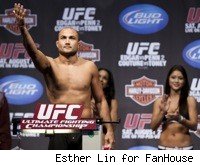 Former UFC champions Matt Hughes and BJ Penn have agreed to meet for the third time, according to MMA Fighting's Ariel Helwani, who learned of the matchup from sources close to the fight. The bout, which will take place at welterweight, will be at UFC 123 at The Palace in the Detroit suburb of Auburn Hills, Mich.

Hughes also posted at his official website that he and UFC president Dana White had discussed him fighting on the card, though he made no mention of an opponent.

CagePotato.com first reported the possibility of the bout Monday evening.

Hughes and Penn first fought at UFC 46 in January 2004. In that fight, Penn submitted Hughes with a rear naked choke to win the welterweight title. Hughes had defended the belt five straight times before the loss. They met again at UFC 63. That time, Hughes, again champion, won with a third-round TKO to defend the title.

Hughes, who was inducted into the UFC Hall of Fame in May, has won three straight fights, including a Submission of the Night win over Ricardo Almeida at UFC 117 last month – his first submission win in nearly five years. His 18 victories in the UFC are a record. Over his two welterweight title reigns, he defended the belt a total of seven times.

After his win over Almeida, Hughes said at the UFC 117 post-fight press conference that he intended to take the fall and winter off to hunt and spend time at his farm in rural Hillsboro, Ill. But the allure of a trilogy fight with Penn, and in the Midwest, may have been enough to change those plans.

Penn, considered by many to be the most dominant lightweight in the sport's history, has lost consecutive fights for the second time in his career – both to current lightweight champion Frankie Edgar. Edgar took Penn's title at UFC 112 in April in a unanimous decision. In the rematch at UFC 118 last month, he dominated Penn, winning 50-45 on all three scorecards.

Penn started his career as a lightweight, then moved up to welterweight to challenge Hughes in their first fight. He fought at middleweight in fights for K-1 before returning to welterweight in the UFC. He moved back to lightweight to fight Jens Pulver in June 2007 and has fought at that weight except for one superfight against Georges St-Pierre at UFC 94, challenging for St-Pierre's welterweight title. St-Pierre won that bout by corner stoppage after four rounds.