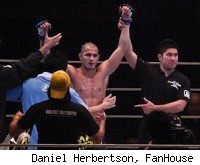 Fresh off a unanimous decision loss to Paul Daley at Shark Fights 13 this past weekend, Jorge Masvidal has a signed a multi-fight deal with Strikeforce.

Masvidal first announced the deal in an interview with BuddhaSport.com, and MMA Fighting confirmed the agreement with Strikeforce director of communications Mike Afromowitz.

Masvidal told the Web site that he had signed a six-fight, two-year deal with the San Jose-based organization.

While his most recent fight against Daley was contested at 170 pounds, Afromowitz said he will be dropping back down to his natural fighting weight of 155 pounds for Strikeforce.

Masvidal said he is ready to fight the best lightweights Strikeforce has to offer.

Let the world know I am going to knock out everybody they put in front of me. I don't have an opponent yet but I want a big fight; you know. I want Melendez or the next big name. No B level fighters. [Lyle] Beerbohm is good but nobody really knows him. I would like to get Kawajiri, that would be great."

The 25-year-old, who trains out of the American Top Team gym in Coconut Creek, Fla., has bounced around many organizations. In the last 12 months alone, he's competed for Bellator, Sengoku, G-Force Fights, ASTRA and Shark Fights.

When he signed with Bellator to be a part of their inaugural lightweight tournament, Masvidal was one of the favorites to make it to the finals. His run ended prematurely, though, when he we submitted by Toby Imada via standing inverted triangle choke. The submission was so impressive, it was universally considered the Submission of the Year in 2009.

Masvidal (20-6) is actually 2-0 under the Strikeforce banner. His last win for the organization came in February 2008 when he defeated Ryan Healy.

No word just yet on when he is expected to debut for the organization.