Charles Oliveira: Jiu-Jitsu Is Above Wrestling 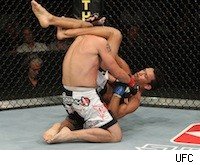 Brazilian fighter Charles Oliveira may be facing a step up in competition when he takes on Efrain Escudero at Wednesday night's UFC Fight Night on Spike TV, but that doesn't mean he felt the need to do anything special to prepare for the specific challenges Escudero presents.

Speaking with MMA Fighting last week, Oliveira (13-0) said he didn't bring in any wrestling-oriented sparring partners to mimic Escudero's style, mainly because he doesn't feel that he needs to. That's because in a head-to-head competition, according to Oliveira, jiu-jitsu is simply the superior ground fighting style.

"We have no wrestlers helping, because the Brazilian Jiu-Jitsu is better for the ground game," Oliveira said via an interpreter. "It's above the wrestling. I'm just training normally, nothing special."

The clash with Escudero (13-1) will be Oliveira's second in the UFC after an impressive 12-0 start to his career. Although almost all of Oliveria's pre-UFC bouts took place in Brazil, his jiu-jitsu prowess and reputation for exciting finishes generated a considerable amount of buzz prior to his Octagon debut.

A first-round submission of Darren Elkins at the last UFC Live event on Versus didn't do anything to dampen that enthusiasm, though now the Brazilian heads into a bout where instead of being the heavy favorite, he's actually a slight underdog.

Oliveira credited Escudero with having "a big heart," but said he isn't at all concerned with his opponent using his wrestling prowess to control the fight.

"The same way Escudero can put me down, I can put him down too. If Escudero takes me down, I can sweep, I can try some submissions. That's what I'm training for. That's part of the game."

Will Oliveira have reason to regret his decision not to work with some wrestlers in training once his fight with Escudero is in the books, or is his jiu-jitsu and overall game really as good as he says it is? We'll have to wait until Wednesday night to get our answer.