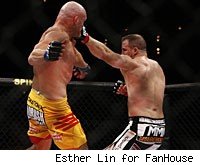 Keith Jardine is now on a five-fight losing streak.

Jardine, the former Ultimate Fighter contestant who rose through the ranks to the point where he was fighting in main events on pay-per-views in the UFC, was fighting in the main event on a much less prestigious pay-per-view -- Shark Fights 13 -- on Saturday night. But he couldn't get past Trevor Prangley and lost a split decision.

"It's never satisfying to beat a guy like Keith when he's down on his luck and trying to make his comeback," Prangley said afterward.

Prangley badly hurt Jardine with a big knee to the head in the early going, and he also opened a big cut over Jardine's left eye. When the fight went to the ground Prangley looked like he was close to finishing the fight by TKO, but Jardine recovered well enough to attempt both an arm bar and a knee bar and keep Prangley from hurting him.

The fight slowed down in the second round, but Prangley did land a hard punch that knocked Jardine down, and that alone may have been enough to give Prangley an otherwise equal round. Jardine landed a couple of leg kicks but generally didn't take advantage of the awkward style that at times gives opponents fits.

It wasn't until late in the third round that Jardine finally seemed to feel a sense of urgency, as in the final minute of the fight he went on the attack and landed combinations that had Prangley hurt. By that point it was too late, however, and Prangley won 29-28 on two judges' scorecards. Jardine won 29-28 on the other judge's card.

Prangley improved his record to 23-6-1 and said afterward that he considered it "the biggest win in my career."

And for Jardine, it was the most disappointing loss.