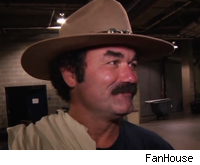 Watching mid- to lower-tier MMA broadcasts can often be a painful experience.

When so many viewers have become accustomed to the high-end production values of UFC pay-per-views, which operate like a well-oiled machine, slummin' it for cards like Shine Fights: Lightweight Grand Prix or Moosin: God of War is sometimes a necessary evil for many that comes with being a fan.

Saturday's Shark Fights 13 pay-per-view could have fallen into that category. And from a strictly visual standpoint, it often made local cable access programming look Emmy-worthy.

Rutten has long been a player in the MMA commentary game. He has the technical background to talk with expertise about what's happening in the fight, but his Dutch accent coupled with his penchant for using onomatopoeias like they're going out of style make him a comic book character come to life. "Bam! Pow! Ooooh! Bap! Powpowpow!"

But then there's Don Frye.

Oh, Don Frye. A living legend, to be certain – winner of the UFC 8 and UFC Ultimate Ultimate 96 tournaments, Pride and K-1 fighter, 8-second knockout deliverer, former firefighter, actor in movies like "Miami Vice" and "Public Enemies" ... about 220 pounds of badass. Do YOU want to be the one to tell him bedecking himself in an American flag button-up cowboy shirt for the broadcast is a fashion faux pas? (Though his cowboy hat, if given the chance, could quite possibly cure Swine Flu.)

With a voice that sounds like the audio love child of Randy "Macho Man" Savage and Wilford Brimley, and a mustache that quite possibly needs its own zip code, Frye brought a mix of pre-planned one-liners and deadpan observations that have already gone down in MMA broadcasting lore under the category of "Did he REALLY just say that?!?" Better still, he excused some of his comments by saying he was in Texas – so that kind of talk was allowed.

Rutten singing "Heigh-Ho" from "Snow White and the Seven Dwarfs" while Houston Alexander ground-and-pounded Sokoudjou would have been a Top 20 moment on any other broadcast. But with Frye along for the ride, it paled in comparison.

17. On Johnny Rees Rees and Paul Bradley both wearing red trunks: "I'll take the white guy in the red shorts."

16. On the staredown between Rees and Bradley: "Like a couple of tribal Vikings out there. Blond hair, blue eyes ..."

15. To Kruck and Rutten at the end of the night: "Great to be here with you ladies."

14. On referee Kerry Hatley stepping in front of the camera angle: "Get Kerry's ass out of the way and we can see the fight."

13. On the difficulty of finding an MMA fight in France: "I didn't know France was ever in a fight. ... I heard Italy just declared war on Spain, and France surrendered."

12. On Alexander after he survived a barrage from Sokoudjou in Round 1: "He's still a little wobbly on his feet, ya know? Either that or he's got good rhythm."

10. On something we're still trying to figure out: "Skin like a mule's ass."

9. On Brock Larson's unanimous decision loss and Frye's continued theory he may have been ill: "I'd like to hear if something was wrong with him tomorrow (instead of right after the fight). You don't want the Tito Ortiz list of excuses here. No one respects that."

8. On a promo spot for a charity for U.S. troops on the ninth anniversary of 9/11: "Get out your wallets, ya cheap bastards, and give 'em some money."

7. After the fights, while straight man/babysitter Kruck was still on his way back to the broadcast table from a post-fight interview with Trevor Prangley: "That was like two hours of rough, hard sex. I need a cigarette and a tequila now."

6. On Keith Jardine's stance: "He's so awkward. He's like a rabid octopus. He looks like he's about to fall over at any time." Fortunately, Kruck didn't point out to him that an octopus, as a cold-blooded animal, cannot get rabies.

5. Obviously no stranger to viral video sensation "Double Rainbow Guy," during a particularly memorable exchange with Rutten: "Double rainbow! Triple rainbow! Double secret probation! ... No, no, no, it's gonna go into triple double overtime!" Kruck saved the day by reminding the viewers, and Frye, "There is no overtime in Shark Fights."

4. During a discussion with Rutten over their records: "I started counting fights when I'd come home drunk and knock my old lady around," to which Kruck, ever the straight-man, quickly covered for him by saying, "I bet she's got a few wins over you, too."

3. On his background as a wrestler: "Look at me: I'm a wrestler. My balls are so big, I wear the excess on my hat."

2. On cauliflower ear: "This guy's tough. His ears are like potatoes. Looks like he got stuck in the birth canal, had to beat him out with a stick."

1. On the preliminary card fights: "That was like prison sex: hard, sweaty, violent and there was a lot of noise."

* Yes, we know there are more. Plenty more. After all, this list doesn't even touch the preliminary card broadcast. What did we miss? You tell us!