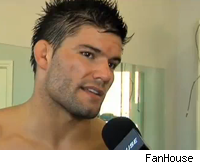 A lightweight fight between Josh Thomson and Gesias "JZ" Cavalcante has been set for Strikeforce's Oct. 9 card in San Jose, Calif., the promotion announced Friday.

And according to Strikeforce's official release on the fight, the winner could get the next title shot against lightweight champion Gilbert Melendez.

Thomson (17-3, 8-2 SF), who trains at the American Kickboxing Academy in San Jose, is a former Strikeforce lightweight title holder, beating Melendez in June 2008 to win the belt. But he lost the title back to Melendez in December in a rematch that was twice delayed due to Thomson's broken ankle.

Cavalcante (15-3-1, 1 NC), an American Top Team fighter, will make his debut with Strikeforce after signing with the promotion in June. Cavalcante won the K-1 Hero's middleweight grand prix in 2006 and 2007 as part of a 13-fight unbeaten streak. Most recently, Cavalcante has gone 1-2 with Dream with a no contest against Shinya Aoki.

In the release, Thomson said he's not looking ahead to a third fight with Melendez, even though a win over Cavalcante could give him that shot.

"Fans expect me to fight guys the caliber of JZ and so do I," Thomson said. "I want to fight all the best lightweights. Right now, Strikeforce has a bunch of top fighters at 155 pounds. There's always going to be talk about a third fight with Gilbert, but that will come when the time is right."

In his last fight, Thomson won with a third-round submission of Pat Healy at Strikeforce: Fedor vs. Werdum in June despite suffering a rib injury in the first round.

Cavalcante won his first fight after a 13-month layoff due to injury, beating Katsunori Kikuno by split decision at DREAM.15 in July – a fight in which he said that long layoff played a role.

"I think I could have performed better in my last fight," Cavalcante said. "But it was my first in a long time, and ring rust was a factor. But now I feel great and I'm excited to be able to get back to doing what I love to do."

Before a unanimous decision loss to Aoki at DREAM.2 in April 2008 – in a rematch from their fight at DREAM.1 that was ruled a no contest due to illegal elbows from Cavalcante, leaving Aoki unable to continue – Cavalcante had not lost since a majority decision setback to Joachim Hansen in July 2004.

Strikeforce: Diaz vs. Noons 2 features a main event welterweight title grudge rematch between champion Nick Diaz and KJ Noons. Diaz's last loss came against Noons in November 2007 when a doctor said he couldn't continue due to cuts near his eyes. Since then, he has won seven straight, including a submission of Hayato Sakurai at DREAM.14 in May. Noons has won six straight, the last coming by knockout against Jorge Gurgel at Strikeforce: Houston three weeks ago.

Strikeforce: Diaz vs. Noons 2 will take place Oct. 9 at the HP Pavilion in San Jose. The main card will air live on Showtime at 10 p.m. Eastern.