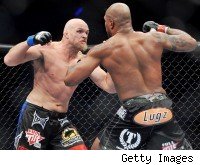 This is the Shark Fights 13 live blog for Keith Jardine vs. Trevor Prangley, the main event of tonight's Shark Fights pay-per-view in Amarillo, Texas.

Released from the UFC after fourth straight losses, Jardine begins his road back by facing Shark Fights light heavyweight champion Prangley in a non-title fight.

MMAFighting.com scores the round 10-9 for Prangley.

Round 2: Jardine connects on a leg kick. Prangley has slowed. Jardine works leg kicks and jabs. Jardine gets through with a couple of straights. Prangley drops Jardine with a right uppercut and Prangley follows up with rights, but Jardine quickly recovers and they hold in clinch. Jardine continues to work on leg kicks and Prangley checks them. Jardine rushes in and lowers for a double-leg. Prangley has an overhook and attacks with his free right hand. Jardine leaves and lands a punch. Jardine lands a left right before the sound of the bell. Jardine was more active, but Prangley picked the right shots.

MMAFighting.com scores the round 10-9 for Prangley.

Round 3: Jardine stays busy against the flat-footed Prangley. Jardine throws a straight right that looks like it tags Prangley. Jardine needs a finish, but he's not aggressive enough. They exchange punches. Jardine gets through with punches, but they don't shake Prangley. Jardine with a nice right hand. Prangley shoots and Jardine defends with 46 seconds left. Jardine with repeated left-rights. Jardine is now turning it up for a last-ditch effort to win. Jardine throws a knee from clinch. More right hands from Jardine. Jardine goes for a takedown, but Prangley defends. Jardine swings away and Prangley steps off for a laugh. Prangley was pretty much on cruise control in the third round knowing he was up two rounds.

MMAFighting.com scores the round 10-9 for Jardine and the fight 29-28 for Prangley.