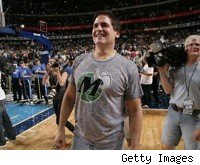 After years of a relationship that could best be termed "sometimes rocky," billionaire businessman and Dallas Mavericks owner Mark Cuban has settled his differences with UFC president Dana White – at least enough for the UFC to open the door for Cuban's TV network, HDNet.

Cuban made the announcement on Friday's episode of "Inside MMA," a weekly mixed martial arts interview and highlights show that airs on HDNet with hosts Kenny Rice and former King of Pancrase champion Bas Rutten.

Cuban said the network will now be granted access to Zuffa events and will be able to use video highlights after fights. And he said Rice and Rutten would be at UFC events as part of the "Inside MMA" show.

"Over the years, Dana and I have had some disagreements at the business level," Cuban said on the show. "Because of those – and I can see his side of it, as well – HDNet has not had access to UFC events. We weren't able to be at the weigh-ins, we didn't have press credentials, we didn't get video after fights. So Dana and I have been talking for the past few months and kind of came to some agreements and worked things out."

Cuban said any perceived rifts with White over the years were merely the nature of business.

"Inside MMA" has done live on-location broadcasts in the past, setting up at weigh-ins for Strikeforce. Since the show airs on Fridays, the same day as weigh-in events for Saturday UFC cards, Cuban said viewers can expect the show and the network to be a fixture with the promotion now.

"Going forward, you'll see HDNet at all the UFC events," Cuban said. "We'll have (Rice and Rutten) there. We'll be doing interviews there. Hopefully we'll be able to go live from weigh-ins. They still have their deals with Spike, obviously, and Versus, and they'll still work closely with some other folks. But we'll have full access, and that's going to be a big change. That means ("Inside MMA") will have a lot more access. I'm looking forward to working really closely with them and doing a lot more with them."

Zuffa partners with Spike TV for UFC events including Fight Night cards, "The Ultimate Fighter" reality series, live finales of that show, highlight shows such as "UFC Unleashed" and the "Countdown" event preview series. And the Versus cable network airs live WEC cards, highlight shows and is in the middle of a deal to show four live UFC events. Recently, ESPN has increased its coverage of MMA, including live broadcasts of "MMA Live" at UFC events.

Cuban launched HDNet in September 2001. Through its HDNet Fights branch, the all high-definition station airs live cards with promotions including Dream, Sengoku, K-1, King of the Cage, Maximum Fighting Championship and Adrenaline MMA, among others.