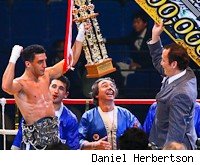 K-1 President Sadaharu Tanigawa announced a near completed card for the K-1 World MAX GP FINAL 16 to be held on October 3 in Seoul, South Korea.

2009 K-1 World MAX Champion Giorgio Petrosyan will return to the K-1 ring for the first time since claiming his title to face 2010 K-1 MAX Eastern Europe champion Vitaly Hurkou, fan favorite Mike Zambidis will take on 22-year-old Chahid and kyokushin stylist Andrews Nakahara will feature in an MMA super fight against a yet to be named Korean opponent.

Albert Kraus, Yoshihiro Sato and Yuichiro "Jienotsu" Nagashima moved on to the Final 8 with their victories back in May.