After Two Opponent Switches, Efrain Escudero to Continue His Progression 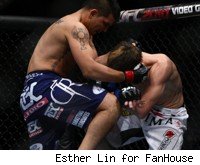 It's been a game of musical chairs for Efrain Escudero. It seems like every time he sits down, he has a new opponent.

Escudero, the Season 8 lightweight winner of "The Ultimate Fighter," will face Charles Oliveira on Wednesday at UFC Fight Night 22. But only after having two other planned matchups for him on the card change.

Escudero was slated for a bout with John Gunderson on Wednesday's card in Austin, Texas, which precedes the Season 12 premiere of "The Ultimate Fighter" on Spike TV. When co-main event fighter Mac Danzig had to pull out of his rematch with Matt Wiman, Escudero moved into Danzig's spot. And then Wiman got hurt and dropped off the card.

Enter Oliveira less than a month before the fight. But Escudero said Thursday on a media call for the event that the opponent changes didn't bother him.

"You know, I really didn't pay much attention to it," Escudero said. "It was a month out, so I had enough time. ... We're worried about what we're bringing to the table. We're not worried on what they're going to bring to the table. We're making them fight our fight, and we're going to go out there and do our job. Being in top shape and being ready to fight anybody they throw at us, that's our main priority and our main goal."

Unbeaten as a professional heading into the TUF house, Escudero followed up his win over Phillipe Nover on the finale with a knockout of Cole Miller at UFC 103. But he ran into fellow unbeaten lightweight Evan Dunham at UFC 114 in May. The armbar Dunham slapped on Escudero in the third round may be what Escudero is known for now as much as winning "The Ultimate Fighter." After an exciting back-and-forth two rounds, Escudero got caught. When Dunham got the armbar, he cranked – and Escudero waited a long time to tap. Too long. But he escaped with just some tendon damage.

Escudero (13-1, 3-1 UFC) said the loss might have been the best thing that could have happened to him, at least in the grand scheme of things.

"Being undefeated puts a lot of pressure on you, always trying to be on top," Escudero said. "I always said I'd put records aside, but at the end, the bottom line is, it actually does play a good role. And now that I got that first loss out of my way – it's one of those where I got caught making a mistake. I blame it a lot on my cardio. But Dunham, I wish him the best. You know, he capitalized on my mistakes. And, I think I've gained a lot more from that loss than I would have gained from a victory."

Escudero rebounded for a win over Dan Lauzon at UFC 114 in May, sweeping the scorecards, save for a late point deduction for a kick that hit Lauzon in the groin. He'll look for two in a row Wednesday, but he'll again have to take on an unbeaten up-and-comer in Oliveira (13-0, 1-0 UFC), who is coming off a 41-second submission win last month.

Like Escudero, Oliveira said the short notice was of no concern. He was able to take the fight based on his quick work over Darren Elkins at UFC Live on Versus 2, leaving that fight with a $40,000 Submission of the Night bonus in his UFC debut.

"The first fight that I had in the UFC was very quick," Oliveira, from Brazil, said through his translator. "So I was in very good shape. When I heard the news about fighting right away, that (didn't bother) me at all because I was already training anyway. You want to fight in the best event with the best of the best. And you've got to take short notice like that. This is normal."

It's only natural that Escudero has been honing his jiu-jitsu game, first coming off the armbar loss to Dunham, then heading into a fight against an opponent who has five of his last seven wins by submission. It's all part of Escudero's evolution into what he hopes will become a complete fighter.

Escudero-Oliveira is the co-main event of UFC Fight Night 22, which takes place Wednesday at the Frank Erwin Center at the University of Texas in Austin. The main card airs live at 9 p.m. Eastern on Spike TV as a lead-in to the Season 12 premiere of "The Ultimate Fighter."