On Fighters and Luck 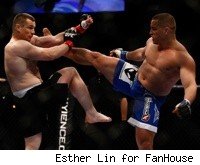 Shortly after his heartbreaking loss to Anderson Silva via fifth-round submission, a dejected Chael Sonnen sat down at the post-fight press conference and made a simple proclamation to everyone who was eager to chalk the loss up to a lucky finish for the champ: "The better man always wins."

At the time, it seemed like a magnanimous statement from the walking insult generator. Even though he won 22 minutes of the 23-minute fight, and even though he'd taken all four rounds on every judge's scorecard, it didn't matter in Sonnen's eyes. Silva won, and that's the only metric that matters when it comes to determining who the superior fighter is. So he said.

But as much as we hear about how anything can happen in MMA, how the four-ounce gloves are known to conjure a certain type of magic in the cage, aren't there times when you just get lucky and win one you shouldn't? Does the better man really always win?

"Definitely not," said Jason "Mayhem" Miller. "But what else is there?"

It's a fair point. It's not like we can open up each guy's brain and find some magic formula that will tell us exactly how good he is. Good is a changeable commodity in the fight game. Some nights you're better than others. Some nights things just don't go your way.

"You get one chance, that one night, and you can get lucky," Miller said. "I think the better guy usually wins. Just mathematically it works out that way. Usually, it's who's better that night. I've had so many fights where afterwards I was like, dude, I shouldn't have won. Either because I was sick or f----d up or whatever. And then there were others where I did lose and thought, well, I can't believe I even did this because I was so hurt or sick I was going to pull out. That's life, though."
I don't think, in my opinion, that anybody really knocks someone out with what they thought would knock them out.
-- Pat Barry
But this presents a problem for outside observers. Most of the time we never know if fighters are hurt or sick or just not all there, because they've learned that it's not worth the trouble of trying to explain it to us. They take their loss and move on.

Then, there are also the times when nobody's sick or injured, but one guy just catches a fortunate break. Kenny Florian can remember one time when he was that guy.

"I guess the Chris Leben fight, certainly, that was probably the only fight where I felt like I was losing and got off easy. I got that cut. I wasn't winning the fight by any means. He was a guy with probably literally ten times as much experience as me at the time. He was much bigger, much better, and maybe even deserved to go through [the "Ultimate Fighter" tournament] over me, but he didn't. That's probably the only time that happened to me. It's rare, but it happens. Out of my twenty fights or so, that's the only time it's happened."

The lucky cut is somewhat rare, as is the lucky submission. But the lucky punch? That's a trope that's as old as punching itself. It couldn't have been long after the first caveman learned to ball up his hand and use it as a weapon that some other outmatched early man knocked a bigger, stronger foe unconscious with a shot that was more of a hope and a prayer than a tactical assault.

Pat Barry has flung enough punches at other humans' heads to know how that goes. The way he tells it, knockout punches are almost never the carefully premeditated affair many of us assume them to be.

"I don't think, in my opinion, that anybody really knocks someone out with what they thought would knock them out. I think knockouts happen, for me anyway, when it's usually kind of accidental. I mean, you always throw the punch with the hope and intention of knocking someone out, but you never know it's going to happen. I've thrown punches before that were just supposed to feel guys out, then it lands and the guy falls down unconscious. At the same time, I've also thrown power shots on people that I knew were going to land, and they've done nothing."

For instance, there was the right hand he floored Mirko "Cro Cop" Filipovic with. Barry felt sure that one was a fight-ender. It knocked Filipovic down, but it also broke Barry's hand in the process. Talk about bad luck.

But then, there have been times in Barry's career where the pendulum has swung in the other direction.

"I've had kickboxing matches in China where I went in going, this is not going to be good. I'm not ready for this, I'm not there, and I just don't feel prepared. Then the bell rings, I throw a punch, and the guy goes down unconscious. ...There's a sense of relief, honestly."

MMA is somewhat unique when it comes to the element of luck. In football maybe you can get lucky with a hail Mary pass that bounces off someone's helmet and lands in your receiver's arms in the end zone, but in order for it to matter the game has to be close to begin with. In MMA, you can lose every second of the fight and still win it at the end. As long as there's time left on the clock, you have a chance.

"The more punches you throw out there, the luckier you tend to get," said "Mayhem" Miller. "That's part of mixed martial arts. That's why we love it. You have that ability at any time to end it."

But it leaves us with the same question we started with: if you can get lucky and win a fight, does that mean you were the better fighter? If you lose 99% of the fight and still win, does that necessarily make you the better fighter even on that one night? Is the end result all that matters?

Maybe tonight is your lucky night. Then again, maybe it's the other guy's.