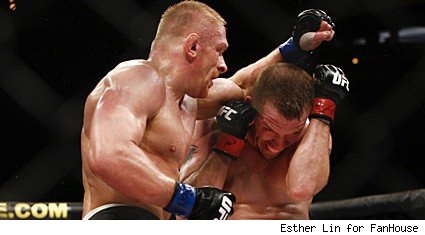 A lightweight bout between Dennis Siver and Andre Winner is planned for UFC 122 in Germany, sources told MMA Fighting's Ariel Helwani on Thursday.

The event will be the UFC's second in Germany and will be a homecoming for Siver. He also fought on the promotion's debut in that country, UFC 99 in June 2009, submitting Dale Hartt with a first-round rear naked choke. Siver (16-7, 5-4 UFC) is of German and Russian descent and began his MMA career in Germany.

Siver last fought at the Season 11 finale of "The Ultimate Fighter," beating Spencer Fisher by unanimous decision. Three of his last five fights have netted him post-fight bonus awards – two Knockout of the Night wins (Nate Mohr at UFC 93, Paul Kelly at UFC 105) and a Fight of the Night against Ross Pearson at UFC Fight Night 21, though he lost a decision.

Winner (11-4-1, 2-2 UFC), from England, will look to rebound from a decision setback against Nik Lentz at UFC 118 just 12 days ago. A member of the Season 9 cast of "The Ultimate Fighter," Winner reached the finals, where he lost a unanimous decision to Pearson, a fellow U.K. fighter and his Team Rough House teammate.

UFC 122 will take place Nov. 13 at the Konig Pilsener Arena in Oberhausen, Germany, and is scheduled to air the same day on tape delay on Spike TV. The promotion's debut in Germany came under fire there. Minors were banned from attending UFC 99 in person. And earlier this year, the UFC was banned from German television because the Bavarian state office for new media believed the sport glorifies violence.

Though the event has not yet been officially announced by the UFC, the main event is expected to be a middleweight contenders bout between Vitor Belfort and Yushin Okami.

Belfort has not fought since a UFC 103 win over Rich Franklin last September. He was expected to face middleweight champion Anderson Silva at UFC 109, but Silva was still recovering from surgery. And Belfort, himself, had to withdraw from their planned UFC 112 fight in April with an injury. With plans in the works for a rematch between Silva and Chael Sonnen after their fight at UFC 117 last month, Belfort again finds himself waiting for Silva, but now with an opponent to work through before getting a shot.