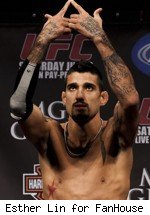 Kendall Grove's next opponent will be former title contender Demian Maia on Dec. 4 at the TUF 12 Finale in Las Vegas, the TUF 3 winner revealed late Tuesday on his social networking pages.

The fight is a huge opportunity for Grove to rise into middleweight contention as well as to ensure an extended career with the UFC, especially after Grove was punished for criticizing Spike TV and The Ultimate Fighter show, prompting the demotion of his most recent fight at UFC 116 against Goran Reljic from the Spike TV broadcast to the untelevised undercard.

Grove (12-7) registered a much-needed win over Reljic by split decision in July after coming off a TKO loss to Mark Munoz at UFC 112 in April. Meanwhile, Maia (13-2) two weeks ago dominated Mario Miranda for the unanimous decision verdict at UFC 118 in Boston.

Both men own a .500 record in their previous four fights and are in search of their first back-to-back wins of the last year.

Currently on deck for the TUF 12 Finale card is a light heavyweight showdown between Stephan Bonnar and Igor Pokrajac and the finals of the season's lightweight competition.