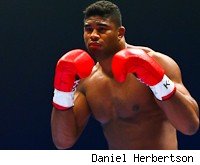 Tanigawa was this week quoted as saying that the much needed financial partnership with Chinese investment bank PUJI has been pushed forward to begin at the end of September and so PUJI money will be supporting the Korean Final 16 events.

A fan vote is currently unde rway to fill the remaining six spots in the K-1 World GP Final 16. Although the results of the fan vote have not yet been announced, Tanigawa noted that he was surprised at how many votes Romanian Dancing with the Stars participant Catalin Morosanut and former UFC Heavyweight Champion Andrei Arlovski have received.

Remy Bonjasky is qualified to participate in the Final 16. but is unable to take his spot due to his ongoing eye injury.