Yves Lavigne Talks Controversy Over Comments: 'Those Are Not My Quotes' 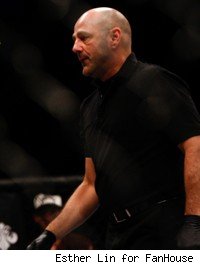 MMA referee Yves Lavigne said he wanted to clear the air regarding some inflammatory quotes attributed to him in a Canoe.com story by Vincent Morin recently, so he put it as plainly as he possibly could.

"I did not give him an interview on or off record," Lavigne told Ariel Helwani during Tuesday's episode of "The MMA Hour." "Those are not my quotes. This is not me. Is that enough?"

Lavigne found himself at the center of the controversy after the story quoted him as saying that UFC welterweight champ Georges St. Pierre will dominate Josh Koscheck in their rematch at UFC 124 in Montreal this December, and that Koscheck was scared to exchange punches with Paul Daley in his last fight in Montreal.

But Lavigne, who's a regular at UFC events and may have likely been slated to work the main event bout in his home province of Quebec, insisted that he never spoke with Morin, nor does he have any idea where the quotes came from.

"All I know, I'm in the middle of this. I spoke with my lawyers, and apparently [the quotes] are down, or they're not on the internet anymore. But the damage has been done," he said.

Naturally, the athletic commissions that employ Lavigne as a ref were disconcerted by comments that seemed to represent an inappropriately outspoken public opinion from a referee who is supposed to remain impartial and, ideally, mostly quiet outside the cage.

Lavigne said he assured them that the remarks were not his, and also added that he would not be working the fight following this little dust-up, though he has no plans to approach Koscheck about the story, remarking, "I think there should be a healthy distance between the ref and the fighters."

Lavigne also said he'd read online where the author of the story has been involved in other suspicious reports in the past.

"I read on the internet, I think it's Dave Simon from Team 990 put something on the internet where apparently he has a beef with him or is in court...against him, because of things he wrote in the press. And apparently other fighters in Quebec and managers have the same issue with him."

Even though the story has since been removed, Lavigne said he isn't ruling out legal action against the writer.

"I can bring him to court. I've got different options. ...You know, with lawyers, there's a dollar sign attached to it. If you go that way, it might cost you that much or that much or that much. I'm in a process of evaluating everything and to see if I have the financial back-up to go all the way."

Lavigne, who struggled at times to find the right words in English, told Helwani that he wasn't planning on doing any more interviews on the subject. Instead, he hopes this public refutation of the story will be enough to placate everyone involved.

"I just read a few things on the internet, and I'm like, okay, maybe I should say differently. My English is not as good as I want to. I don't see all the nuance or subtlety of the word. So look, I didn't do it, basically."