Forrest Griffin Wants to Win a Fight Before End of 2010 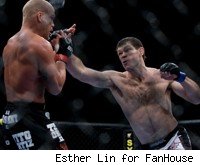 Forrest Griffin has never missed more than a year of action his entire MMA career, and while that streak will likely end this year, the former champ says he would like to fight once more before the end of it.

"My goal right now is to win a fight before the end of the year," Griffin stated Tuesday to Ariel Helwani on The MMA Hour.

There are two remaining pay-per-views this year yet to be officially announced, UFC 123 in Auburns Hill, Mich. and UFC 124 at the Bell Centre in Montreal, Quebec, Canada (UFC 122 airs on Spike TV). Another possibility is UFC 125, which will be on the first of January 2011. That date seems likely considering Griffin's preference to fight near home in Las Vegas; however, Griffin wouldn't confirm the probable location of his next fight.

"The last fight they asked me who I wanted to fight, I said I don't care who but I would really want to fight in Las Vegas and they gave me that and I backed out of that fight," Griffin said. "So I kind of feel like they gave me what I asked for and I backed out, so I'm kind of at their mercy."

Last month a rumor circulated that Griffin would face rising contender Jon Jones. Griffin said he was never offered Jones and he's only been in contact with the promotion during an early point of his physical rehab.

"UFC gave me a call a while back and I was training with eight pounds and the [thought of] taking a fight when I'm not really training MMA at all was terrifying," he said. "But now that I'm training I'll have somewhere to fit those nerves."

Always the company man, Griffin said he wouldn't volunteer to fight Jones, but "if it happens, I guess it happens." It wouldn't be the brightest idea, though, Griffin pointed out.

"That's a great fight to take a year layoff with injury fighting a guy coming off like a hot three-fight win streak," Griffin remarked sarcastically.

Griffin is approaching his 24th career fight and entering his 10th year of competition. He's only missed over a year of professional action in 2004 and that was because of his involvement on The Ultimate Fighter 1 television show, which were technically exhibition bouts.

Currently 31 years old, injuries have been piling up and when asked if he has any retirement plans, Griffin told Helwani he'd like to retire at 36.

"I've only been fighting twice a year for the past couple of years," Griffin said. "I'm just kind of listening to my body."

Perhaps training at Xtreme Couture with an ageless wonder didn't help his cause, Griffin joked.

"I think Randy Couture stole my youth and I think I'm aging double."