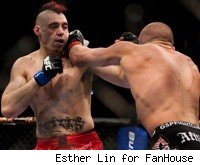 I love the fact that Dan Hardy writes a column for his local media outlet, This Is Nottingham. I wish more fighters would sit down at a computer and give us a look inside their mind, though, as Hardy demonstrated with his latest effort, sometimes it doesn't work the way you think it's going to.

The title of today's piece is "Lentz went into hiding for the big fight." It ostensibly deals with Nik Lentz's grappling-centric win over Andre Winner in a slow-paced fight at UFC 118, but a more accurate description of the column might have been: "Too much wrestling in MMA, says guy whose friends keep losing to superior wrestlers."

Hardy's thesis, more or less, is that there are too many wrestlers in the UFC who just want to take opponents down and hold them there, and this is a problem the sport needs to address via rule changes. As Hardy writes in his attempt to preemptively counter the argument that he and many of his fellow Brits simply need to become better wrestlers:

"Rather than saying 'oh, these guys can't wrestle', I think the problem is there's beginning to be too much wrestling in UFC Octagon, not too little of it in the gym. There are a lot of people out there calling themselves 'UFC fighters' who are nothing of the kind. In the UFC, you should go for finishes."

This is not a new argument. The hand-wringing about all the wrestlers who opt for controlling the fight rather than going all out for a finish has been a part of the MMA dialogue since the days when Kevin Randleman was the UFC heavyweight champ. But the question remains, how do you limit such an effective style without harming part of what's great about MMA as a sport?

Don't get me wrong, I know where Hardy is coming from. Anyone who's ever had to sit through a three-round snoozefest of nothing but takedowns and ground control can empathize with his position. It would be a more exciting world if every fighter were looking for the finish in every fight. Unfortunately, that's not the world that MMA exists in, nor is it likely to be any time soon.

"You should work for 15 minutes to knock your opponent out, submit him, or improve your position to give yourself the best chance of doing either," Hardy writes. "But there's guys out there who just want to use wrestling to hold a stalemate for 15 minutes, without ever risking going for ground and pounds or attempting submissions. This isn't 'cheating within the rules' – it is actually against the rules. 'Timidity' is outlawed in the Unified MMA rules and what better describes the act of holding on to an opponent and waiting for the clock to tick down with no attempt or inclination to do any damage?"

The solution, according to Hardy? First, you stand them up, which referees already do with sometimes alarming quickness. If that doesn't work and the wrestler keeps at it?

"Warn him and then start taking points," Hardy argues

That would be a great solution. If we wanted to slowly turn MMA into an entirely different sport.

I don't disagree that even the most dominating wrestlers should be looking for ways to finish fights, but that's more of a preference than a mandate from the rulebook. Any attempt to outlaw the slow, grinding wrestling attack is an attempt to favor one fighting style over another, which isn't what MMA is all about.

If Hardy wants to get those wrestlers off of him and his teammates, the answer is the same as it's always been: improve your takedown defense. After all, a striker never has to worry that the referee will put him on the mat if he's not active enough. He can lay back and wait to counter, and the worst he'll get are some boos from the fans if that results in a lack of action.

Even if we don't like seeing performances like the one Lentz put on against Winner, it's still the lesser of two evils. To try and do something to prevent that from ever happening again would mean a fundamental philosophical change to the sport. That's something we don't need.

The stigma of the decision-prone wrestler -- which comes with disdain from fans and less lucrative paychecks -- is probably enough to keep most fighters active in the ground game. The ones who aren't so easily motivated? Sooner or later they'll run into someone with a takedown defense.