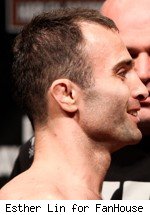 Alex Karalexis is out of a previously announced fight against Tiequan Zhang at WEC 51 and will be replaced by promotional newcomer Jason Reinhardt.

MMA Fighting learned of the change from sources close to Reinhardt's camp. The lightweight, who trains at the Pat Miletich camp in Bettendorf, Iowa, is 20-1 with just two fights going beyond the first round.

Reinhardt's lone setback came at UFC 78 to Joe Lauzon, a first-round submission loss. It was his only appearance in the UFC and his only fight thus far with a major promotion.

The WEC last week made official the signing of Zhang, the promotion's first fighter from mainland China, and announced he would be fighting Karalexis, a participant on the inaugural season of "The Ultimate Fighter." The bout was scheduled for the preliminary card at WEC 51 at the 1stBank Center in Broomfield, Colo., on Sept. 30.

But now Reinhardt steps in as Karalexis' replacement on less than a month's notice. The 40-year-old native of Decatur, Ill., has not fought in a sanctioned bout, according to online databases, since January 2008. Sixteen of his 20 wins have come by submission, most coming on Midwestern promotions like Extreme Challenge and Courage Fighting Championships.

The WEC has not made official the Zhang-Reinhardt fight, though the original Zhang-Karalexis bout is not listed at the promotion's official website as a part of the WEC 51 card.

WEC 51: Aldo vs. Gamburyan features a main event featherweight title fight between champion Jose Aldo and Manny Gamburyan, as well the long-awaited rematch between rival lightweights Jamie Varner and Donald "Cowboy" Cerrone. Also on the card, former bantamweight champion Miguel Torres looks to end a two-fight skid against Charlie Valencia and Chan Sung Jung, who gained an instant following after his battle with Leonard Garcia at WEC 48 in April, takes on George Roop.

The main card will air live on the Versus cable network at 9 p.m. Eastern on Sept. 30.