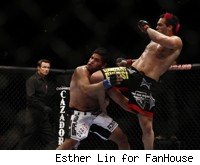 Moments after his Octagon debut at UFC 116, Ricardo Romero was back in the locker room of the MGM Grand washing the blood off his body and doing a little damage assessment.

He couldn't close his jaw all the way, so he was pretty sure that was broken. When he tried to lift his arm a sharp pain shot through his chest, indicating that something was probably damaged in there. His knee was also starting to stiffen up, making even the act of standing in the shower seem increasingly dicey.

"I was just thinking, this is going to be a really fun trip back home," Romero recalled with a chuckle.

Romero would leave Las Vegas after his first UFC fight with a broken jaw, torn pectoral muscle, and sprained knee. He also left a winner, which might be the most amazing part, especially considering what a horrible start he got off to against MMA veteran Seth Petruzelli that night.

In the opening round of his scrap with Petruzelli, Romero got battered with punch combos, dropped with a right hand, and even smacked with a rarely seen double axe-handle smash. What's more, he was acutely aware of how badly things were going, and he couldn't stop himself from thinking about it even as the fight was happening.

"As soon as the bell went off, fifteen seconds into it, my mind's racing and I'm thinking a million different things," Romero said. "With my previous fights, it wasn't like that. Usually you're reacting and just going and the training kind of takes over. Your thoughts are just as quick as your body is moving. In this fight, it was the complete opposite."

It was a strange feeling for the former Rutgers University wrestler. He'd come into the fight with an impressive 10-1 record in New Jersey's Ring of Combat organization, but once in the cage with Petruzelli he seemed lost.

"You know how people talk about being in the zone, or Michael Jordan would say the basketball hoop was so big that I could just throw it in? This was the complete other end of that. I was thinking about every step I took. Left foot, right foot, throw a left, throw a right. And I knew, man, this is not going well. Then it was like, great, now I'm thinking about how bad I'm fighting when I should just be fighting."

Between rounds Romero's head was swimming. As his trainer, Brian Katz, rattled off instructions for him in the corner, Romero couldn't even focus on what he was saying.

"I really wasn't listening at all. I was nodding my head and going, 'yeah, yeah, yeah,' but I was just thinking, you've got to get out of this funk or you're going to lose this fight."

Somehow – and he's still not entirely sure how – Romero managed to do just that. Late in the second round, and after getting beaten up on a little more, he managed to get Petruzelli on his back. That's when Romero looked down and noticed all the blood.

"I just knew something was up right at the end there when I was on top of him and all the blood started coming out of my mouth. That's when I realized, I tried to close my mouth and I couldn't. My jaw just wasn't lining up right and I couldn't close my mouth. Not good. You worry about it for a little bit, but I just kept plugging along and I was fortunate enough to have him tap."

Even with the broken jaw, the torn pec, and the injured knee, Romero managed to lock up an armbar for an improbable come-from-behind victory in the second round.

After the victory, Romero was overwhelmed with the thrill of the experience, but also slightly dazed. On one hand, he was elated to have gotten the win in such a difficult fight. On the other, his body felt like he'd been in a plane crash. When he ended up limping back to work at his job as an energy derivatives broker on Wall Street, he did so with a bruised face and a jaw that was wired shut, prompting his co-workers in the pit to dub him "Mumbles."

"I got so much support from them, though," Romero said. "People I'd never even talked to were coming up and telling me, 'That was an incredible fight.'"

When Romero finished his wrestling career at Rutgers in 2001, showing up for a work with a broken jaw that he sustained on national television was never something he thought he'd do. He was focused on his career as a broker and on the arrival of his new son. But when things didn't work out with the mother of his child, he ended up turning to MMA as something to take his mind off his depression.

"I was crushed. When she moved out of the immediate area, I didn't get to see my son every day anymore, and I was crushed. ...That's when I started to going to Brian's gym."

Around three years later the 32-year-old Romero struggled through a buffet of injuries to claim victory in his UFC debut. It may have been one of the worst starts by any UFC rookie who went on to win the fight in the end. How did he do it? He can't say. All he knows is that sometimes good things happen when you don't give up.

"You just have to keep at it, keep going, and hope your training takes over. I can't tell you a formula or method. Sometimes it doesn't happen. Some people say it's like quicksand, where the more you struggle against it the worse it gets. I just kind of eased out of it, but it definitely wasn't the prettiest fight I've ever had. You just have to battle through it."