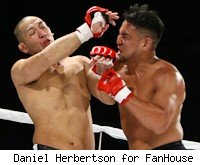 Despite taking kicks to the head and body from Yuji Sakuragi, light heavyweight King of Pancrase Ryo Kawamura was taking control of the standup early with jabs and hooks. Looking to turn up the pressure for a finish late in the first, Kawamura dropped his hands and ate a huge hook from Sakuragi that stiffened the champion and put him down. A missed stomp from Sakuragi gave Kawamura the chance he needed to stumble back to his feet but again he ate another right hook, ending the champion's night at 3.55 in the first.

Due to the bout being a non-title match, the belt did not change hands but given this result a rematch for the title will certainly be on the cards.

Through three rounds both King of Pancrase Manabu Inoue and challenger Tashiro Akai were unable to secure any dominant positions for any length of time, both fighters getting sweeping and reversing almost at will. With Inoue finding a slight advantage on the mat and Akai having the edge on the feet, the bout was set to be ruled a majority draw but the defining moment came in the second round when Tashiro Akai received a yellow card and a point deduction for blows to the back of the head while he had Inoue in his guard. The point deduction ultimately gave Inoue the victory with a one point lead on two of of the judges cards.

Inoue will move on to represent Pancrase as a seeded fighter in the SRC 2010 Bantamweight Asia tournament.

"Windy" Tomomi hammered American import Monica Lovato with kicks to the body and legs to take home a unanimous decision, coming close to finishing in the final round with series of knees and kicks to the body.

Former Flyweight King of Pancrase Mitsuhisa Sunabe secured another shot at the Pancrase crown with a devastating slam KO over top-ranked Shooto flyweight Shinpei Tahara. Sunabe took the center of the ring and controlled the action in the first and second rounds with his superior speed and length and looked to be en route to a pedestrian decision.

Late in the third round though, Tahara locked in a triangle but quickly found himself hoisted into the air and then slammed back down to the canvas before he was able to release the submission attempt. The former Shooto title contender was out on impact but Sunabe followed up with vicious punches to the jaw to capture the victory and the title shot.

With Sunabe's victory, he will face champion Kiyotaka Shimizu in a rubber match for the title.